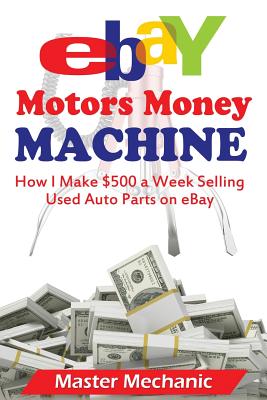 
Available in Warehouse. Wait for Email Confirmation for ETA
This book cannot be returned, cancelled, or exchanged. Please call for availability and pricing
Make $500 a week selling used auto parts on eBay I'm going to show you how I make $500 a week (usually much more) selling used auto parts on eBay. And, the great thing is-it's something anybody can do, if you don't mind getting a little dirty or greasy. What I'm going to show you doesn't require a fancy education or previous experience selling on eBay. You don't even really need to know anything about cars or car parts, but if you do-that's a big plus that can help you make even more money. What got me started selling car parts was I had an old mustang I always planned to restore. Then I got married. We had a kid, and the car sat there in the driveway gathering dust and complaints from the neighbors about it being an eyesore. Finally, I had enough and decided I'd try to sell it on Craigslist, but I didn't get any takers. I called the scrapyard. They offered me one hundred bucks. I was pretty sure a few of the parts alone were worth more than that. Several days later I got this crazy idea. What if I part it out on eBay? I was sure to get more than $100. Over the next three weeks I pulled every part I could off of that car-shift knobs, shifter arm, distributor, glove box door, hood emblem, and window crank handle. You name a part, I put it up for sale, and the funny thing is they sold. Someone paid me $33.00 for a window crank, $25.00 for the Mustang horse emblem, and $25.00 for the owner's manual. It was nuts People emailed to ask if I had this or that part left. When I got their emails I'd head back out to the car with my wrench and screw driver to yank it out for them. I'd come back in the house and list the part on eBay for the agreed upon price. After three weeks I'd sold close to $700 in parts from a car the junkyard offered a hundred bucks for. All I could think was-I need another car. That's when my brother-in-law popped into my head. He had an old Blazer. He was always saying he needed to get rid of it. I offered to take it off his hands for fifty bucks, and he said okay. By this time I was pretty much hooked. The Blazer parts sold for close to $1000. I picked up a few more Junkers on Craigslist and made a couple dollars on them. The money was good, but it was just too much work. I told myself there had to be an easier way-one that didn't take so much time, effort, or hard work. That's what I'm going to cover next-how to get all of the used car parts you want without the hassle of having to buy the entire car and strip it down-without having to get all greasy and dirty. Get serious about your eBay selling Order this book - TODAY