The United States of Australia: An Aussie Bloke Explains Australia to Americans (Paperback) 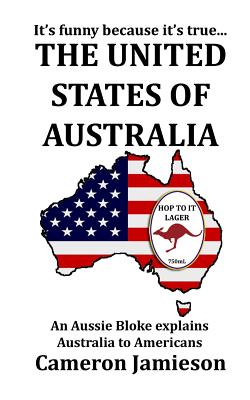 The United States of Australia: An Aussie Bloke Explains Australia to Americans (Paperback)


Available in Warehouse. Wait for Email Confirmation for ETA
This book cannot be returned, cancelled, or exchanged. Please call for availability and pricing
The United States of Australia is a hilarious and educational introduction to Australia and its quirky inhabitants. Written for Americans, but equally amusing to anyone visiting the shores of the Great Southern Land, this book examines the relationship between Australia and the U.S., including how Australians view their American cousins. Topics include Blokes and Sheilas, Bloody Foster's, Dangerous Creatures, Talking to Dogs, The GAFA, Speaking Strail-yun and Working for the Queen. Confused? You won't be after reading this book.
Cameron Jamieson is a quintessential Aussie Bloke. That is, he speaks his mind, is passionately Australian, is down-to-earth and, above all, he does not drink Foster's Lager beer. Born in 1965, Cameron left school at the age of 15 to become a labourer because it was the social expectation at the time. Thanks to an Australian Army career of over 30 years (full and part-time) he has met thousands of Americans, including his beautiful wife when they served together on a US Navy-led humanitarian mission in Southeast Asia in 2012. In the 1990s Cameron completed a journalism degree with the University of Western Sydney. This allowed him to start his life-long dream of pursuing writing as a career.