The Girl in the Show: Three Generations of Comedy, Culture, and Feminism (Hardcover) 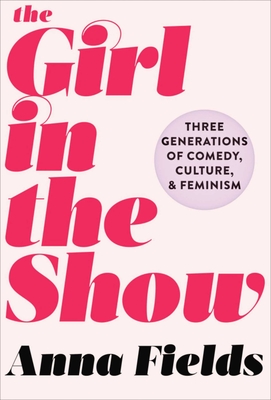 The Girl in the Show: Three Generations of Comedy, Culture, and Feminism (Hardcover)


This title is likely unavailable. Email or call for price and availability.
For fans of Tina Fey, Amy Poehler, Amy Schumer—and every other “funny woman”—comes a candid feminist comedy manifesto exploring the sisterhood between women’s comedy and women’s liberation.

“I’m not funny at all. What I am is brave.” —Lucille Ball

From female pop culture powerhouses dominating the entertainment landscape to memoirs from today’s most vocal feminist comediennes shooting up the bestseller lists, women in comedy have never been more influential.

Marking this cultural shift, The Girl in the Show provides an in-depth exploration of how comedy and feminism have grown hand in hand to give women a stronger voice in the ongoing fight for equality. From I Love Lucy to SNL to today’s rising cable and web-series stars, Anna Fields’ entertaining retrospective combines amusing and honest personal narratives with the historical, political, and cultural contexts of the feminist movement.

With interview subjects like Abbi Jacobson, Molly Shannon, Mo Collins, and Lizz Winstead among others—as well as actresses, stand-up comics, writers, producers, and female comedy troupes—Fields shares true stories of wit and heroism from some of our most treasured (and under-represented) artists. At its heart, The Girl in the Show captures the urgency of our continued struggle towards equality, allowing the reader to both revel in—and rebel against—our collective ideas of “women’s comedy.”
Anna Fields is an established author, screenwriter, television writer, producer, and award-winning documentarian whose work has been published and produced by Penguin, the Daily Beast, Newsweek, Forbes, Marie Claire, CBS, ABC, Turner Network, Mandalay Entertainment, and the Austin, LA, and Toronto Film Festivals. She resides in New York City.