A New Ireland: How Europe's Most Conservative Country Became Its Most Liberal (Hardcover) 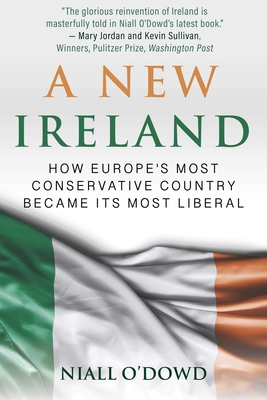 A New Ireland: How Europe's Most Conservative Country Became Its Most Liberal (Hardcover)


This title is likely unavailable. Email or call for price and availability.
It’s not your father’s Ireland. Not anymore. A story of modern revolution in Ireland told by the founder of IrishCentral, Irish America magazine, and the Irish Voice newspaper.

In a May 2019 countrywide referendum, Ireland voted overwhelmingly to make abortion legal; three years earlier, it had done the same with same-sex marriage, becoming the only country in the world to pass such a law by universal suffrage. Pope Francis’s visit to the country saw protests and a fraction of the emphatic welcome that Pope John Paul’s had seen forty years earlier. There have been two female heads of state since 1990, the first two in Ireland’s history. Prime Minister Leo Varadkar, an openly gay man of Indian heritage, declared that “a quiet revolution had taken place.”

It had. For nearly all of its modern history, Ireland was Europe’s most conservative country. The Catholic Church was its most powerful institution and held power over all facets of Irish life.

But as scandal eroded the Church’s hold on Irish life, a new Ireland has flourished. War in the North has ended. EU membership and an influx of American multinational corporations have helped Ireland weather economic depression and transform into Europe’s headquarters for Apple, Facebook, and Google.

With help from prominent Irish and Irish American voices like historian and bestselling author Tim Pat Coogan and the New York Times’s Maureen Dowd, A New Ireland tells the story of a modern revolution against all odds.
Niall O’Dowd is the founder of IrishCentral, Irish America Magazine, and the Irish Voice newspaper. He is also responsible for publishing IrishCentral.com and the Irish Emigrant newspaper in Boston. Niall was awarded an honorary doctorate by University College Dublin for his work on the Irish peace process, which was a subject of a book, Daring Diplomacy, and a PBS Special, An Irish Voice. He has written for the New York Times, the Guardian, Huffington Post, and the Irish Times. He lives in New York City.
"As the far-right takes hold across Europe and the world, Ireland—once a bastion of conservative Catholicism—has seen a liberal revolution. Niall O'Dowd, a journalist who has chronicled every major shift in Irish identity, tells the extraordinary story of how Ireland reinvented itself into a beacon of liberalism. In showing the historical roots and modern day efforts that led to this massive change, O'Dowd delivers a compulsively readable book that transcends Ireland's borders. A must read."
— Amy Chozick, writer-at-large for the New York Times and bestselling author of Chasing Hillary

"No country has changed more in the last fifty years than the Republic of Ireland. It has gone from a conservative, priest-ridden country to one of the most dynamic democracies in the world.  A New Ireland is not only a complete history of Ireland, but a compelling and suspenseful behind-the-scenes chronicle of how it all came about. A marvelous and compelling read."
—Dermot McEvoy, author of The 13th Apostle: A Novel of Michael Collins and the Irish Uprising

"The glorious reinvention of Ireland is masterfully told in Niall O'Dowd's latest book. A New Ireland explains just how fast social change has come to the country. It's an insightful look at Ireland's hunger for fairness and rapid cultural transformation by a keen observer. O'Dowd has lived Irish history and knows its problems as well as its poetry."
— Mary Jordan and Kevin Sullivan, Winners, Pulitzer Prize, Washington Post

“I am sprinting through this marvelous new book by Niall O'Dowd about how Europe's most conservative country became its most liberal―how people overthrew a crusted theocracy. First nation to legalize marriage equality by a vote of the entire country. A New Ireland."
— Jim Dwyer, author and Pulitzer Prize-winning columnist, New York Times