The Plot to Overthrow Venezuela: How the US Is Orchestrating a Coup for Oil (Paperback) 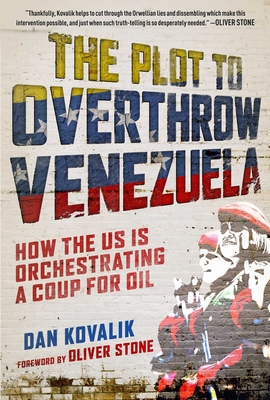 The Plot to Overthrow Venezuela: How the US Is Orchestrating a Coup for Oil (Paperback)


This title is likely unavailable. Email or call for price and availability.
“Helps to cut through the Orwellian lies and dissembling …just when such truth-telling is so desperately needed.”—Oliver Stone, Activist and Director, from his Foreword

Since 1999 when Hugo Chavez became the elected president of Venezuela, the US has been conniving to overthrow his government and to roll back the Bolivarian Revolution which he ushered in to Venezuela. With the untimely death of Hugo Chavez in 2013, and the election of Nicolas Maduro that followed, the US redoubled its efforts to overturn this revolution. The US is now threatening to intervene militarily to bring about the regime change it has wanted for twenty years.

While we have been told that the US’s efforts to overthrow Chavez and Maduro are motivated by altruistic goals of advancing the interests of democracy and human rights in Venezuela, is this true? The Plot to Overthrow Venezuela answers this question with a resounding “no,” demonstrating that:

The battle for Venezuela which is now being waged will determine the fate of all of Latin America for many years to come. The Plot to Overthrow Venezuela lets readers know what is at stake in this struggle and urges readers to reconsider which side they are on.
Daniel Kovalik has been a labor and human rights lawyer since graduating from Columbia Law School in 1993. He has represented plaintiffs in ATS cases arising out of egregious human rights abuses in Colombia. He received the David W. Mills Mentoring Fellowship from Stanford Law School, has written extensively for the Huffington Post and Counterpunch, and has lectured throughout the world.

Academy Award-winning Oliver Stone has written and directed over 25 feature films and 6 documentaries, among them some of the most influential and iconic films of the last decades. Some have been at deep odds with conventional myth— films such as Platoon, Born on the Fourth of July, JFK, Natural Born Killers, Nixon, and Untold History of the United States.
“Thankfully, Kovalik helps to cut through the Orwellian lies and dissembling which make this intervention possible, and just when such truth-telling is so desperately needed.”
—Oliver Stone, Academy Award winning director and screenwriter

“In the face of this almost unprecedented media campaign of lies, which has managed to capture the minds of people who are supposed to be immune to this, Kovalik steps up to the plate. This book is a page-turner. The author has crafted an original manner to completely and comprehensively refute US disinformation by turning American foreign policy against itself.”
—Arnold August, a Canadian journalist and lecturer, is the author of Democracy in Cuba and the 1997–98 Elections and, more recently, Cuba and Its Neighbours: Democracy in Motion.

“The Plot to Overthrow Venezuela is an eloquent and accessible account of one of the most important issues of our period. Dan Kovalik demonstrates why everything that we have heard about Venezuela from Washington and its mouthpieces in the U.S. media is entirely false. This book is not merely a history lesson, however; it is a concrete act of solidarity with the Venezuelan people and the people of Latin America as they forge a path toward sovereignty, dignity, and independence against the grain of Washington's ongoing attempt to make the region its ‘backyard’ for U.S. corporate profits and military operations. It is a must-read for those seeking to understand Venezuela beyond official lies as well as those who are sick and tired of the U.S.’ endless regime-change wars abroad.”
—Danny Haiphong, author of American Exceptionalism and American Innocence: A People's History of Fake News-From the Revolutionary War to the War on Terror