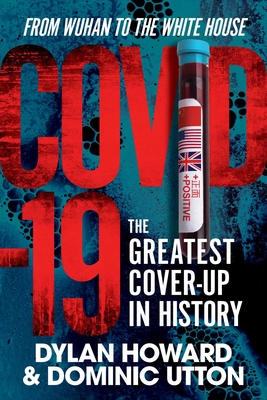 
This title is likely unavailable. Email or call for price and availability.
In the final days of 2019, a new and deadly virus was quietly spreading through the city of Wuhan, China. Within six months it would kill half a million people worldwide, infect a further 10 million, and change the way all of us live, work and play forever.

Now, for the first time, the real story of the greatest global crisis of the age can be told.

Reporters Dylan Howard and Dominic Utton, collaborating from New York and London—infection hotspots in what would become two of the worst-hit nations on Earth—have together mapped the rise, spread and impact of the virus . . . and uncovered some explosive revelations.

COVID-19: The Greatest Cover-Up in History—From Wuhan to the White House delivers the unfettered truth about what is undoubtedly the biggest political scandal of our time. It shows in unprecedented detail how governments in China, the UK, and the US not only failed to protect their citizens from the threat of the disease, but actively conspired to put their own political and economic ideologies above the lives of ordinary people.

From early attempts by Beijing to silence any reports of the new virus to the inability of the WHO to act decisively; from warnings received and ignored by President Trump to decisions taken by the UK government that directly led to the loss of tens of thousands of lives; from whispers of military experiments to outlandish 5G conspiracy theories, Howard and Utton separate fact from fiction, science from hysteria, and expose a trail of dead bodies, wilful mismanagement, incompetence, arrogance, deliberate cover-ups, and outrageous lies that raise serious questions about who is really responsible for the hundreds of thousands killed by COVID-19.

Through vigorous investigations, dedicated reporting, and exclusive first-person sourcing, COVID-19 unearths a more complex understanding of the rise, spread, and consequences of the first six months of the pandemic than has yet been seen,  and exposes shocking revelations about the roles and motivations of the American and British governments in the crisis.

The true story of COVID-19 is not just that of a silent killer that suddenly invaded the world . . . it’s the scandal of a global tragedy that could have—and should have—been prevented.

The real number of deaths and infections from the virus will never be known. The figures have not only been underreported in China, but by supposedly transparent governments in the West for reasons less connected with public safety and more to do with their own mendacity, incompetence, and corruption.

Written with the urgency and tension of a thriller novel but grounded in rigorously factual reporting, COVID-19 is the essential read on the most horrifying scandal of our age.
As a man with unprecedented access to the facts and a reporter who is one of the most feared journalists in Hollywood, investigative reporter Dylan Howard has cracked open scandals that have brought down the careers of Mel Gibson, Charlie Sheen, Hulk Hogan, Paula Dean, and numerous others.

Howard’s sense for news saw him rise to become the undisputed most powerful gossip editor in the world, publishing dozens of salacious tabloid magazines each week, including Us Weekly, The National Enquirer, Star, In Touch, Life & Style, RadarOnline.com, and more.

Described by the New Yorker magazine’s Jeffrey Toobin as “a tabloid prodigy” and AdWeek as “the king of Hollywood scoops,” Dylan also brought to light: the hate-fueled audiotapes of Oscar-winning actor/director Gibson blasting former girlfriend Oksana Grigorieva; the scandal-plagued death of screen darling Farrah Fawcett; the naming of the mother of Arnold Schwarzenegger’s love child; the demise of star-on-the-rise politician Anthony Weiner; and the Tiger Woods sex scandal. He also broke the story of the A-list high-stakes poker scam that was later made into the Oscar-nominated film Molly’s Game.

Most recently, Howard made a name for himself with a stunning exposé of Sheen that revealed Hollywood’s most unapologetic hedonist was HIV positive. It also was a story of extraordinary corruption, violence, lies, intimidation, death threats, and millions of dollars paid out in hush money—a story that he chronicled in a first-person essay for The Hollywood Reporter that AdWeek called “jaw dropping.”

He also develops and executive produces premium unscripted television shows and podcasts, including last year's blockbuster podcast series Fatal Voyage: The Mysterious Death of Natalie Wood, which garnered over 10 million downloads and 50 million media impressions worldwide. The series was named to Apple Podcasts' Most Downloaded New Shows of 2018 and was named a 2019 Webby Best Series honoree by the International Academy of Digital Arts and Sciences.

In 2011, Howard was named Entertainment Journalist of the Year at the National Entertainment Journalism Awards, where the judges labelled him the "go-to guy for authoritative showbiz news and analysis on cable and over-the air television." Howard is also the author of Diana: Case Solved. He currently resides in New York City.

Dominic Utton is a London-based journalist, author, television and podcast writer and novelist with more than 20 years of experience. His work has been shortlisted for the British Press Awards and drawn praise on both sides of the Atlantic.

In addition to fostering a Fleet Street career that has included senior writing and editor roles in newspapers such as The Telegraph, The Sun and The Daily Mail, Mr. Utton has written for dozens of national newspapers and magazines, and has authored several non-fiction books, including: The Real Football Factories an investigation into soccer hooliganism worldwide, Sex Pistols: Uncensored On the Record, and How to Go Wild, an adventure guide for children.

Working alongside Mr. Howard at American Media, Mr. Utton has also been part of the writing and editing team on hit US television shows, such as Robin Williams: When the Laughter Stops, Luke Perry: In His Own Words and Aaron Hernandez Killing Fields. He is the writer of several acclaimed investigative podcasts, including The Killing of Marilyn Monroe, Fatal Voyage Diana: Case Closed, Fatal Voyage: The Death of JFK Jr., The Killing of JonBenet: The Final Suspects and Epstein: Devil in the Darkness, which in 2020 was celebrated as an honoree in the “Podcasts – General Series Documentary” category by The International Academy of Digital Arts and Sciences.

Mr. Utton’s novels include Dead End Close and Martin Harbottle’s Appreciation of Time, the latter of which saw him described as a “latter-day Updike” by the Irish Independent and “compellingly hilarious” by The Daily Express.
"Dylan Howard is the rare combination of cutting-edge journalist, true crime commentator, and relentless investigator. Howard passionately brings comprehensive and groundbreaking analysis to the most compelling mysteries of our time."
— Dr. Phil McGraw, host of TV's #1 daytime talk show, Dr. Phil

“The king of Hollywood scoops.”
— AdWeek

“Dylan Howard is one of the finest journalists writing today. His depth and breadth of experience are second to none; he follows every intricate angle of a story and exposes the truth. As a former detective, I know firsthand the skills that make an exceptional investigator and Dylan has them in spades.”
—Bo Dietl, former NYPD homicide detective who made over made over 1,400 felony arrests