Mother of God: An Extraordinary Journey Into the Uncharted Tributaries of the Western Amazon (MP3 CD) 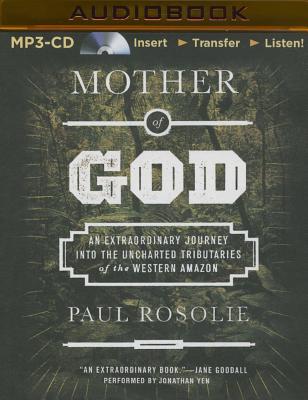 Mother of God: An Extraordinary Journey Into the Uncharted Tributaries of the Western Amazon (MP3 CD)

For fans of The Lost City of Z, Walking the Amazon, and Turn Right at Machu Picchu comes naturalist and explorer Paul Rosolie's extraordinary adventure in the uncharted tributaries of the Western Amazon--a tale of discovery that vividly captures the awe, beauty, and isolation of this endangered land and presents an impassioned call to save it.

In the Madre de Dios--Mother of God--region of Peru, where the Amazon River begins its massive flow, the Andean Mountain cloud forests fall into lowland Amazon Rainforest, creating the most biodiversity-rich place on the planet. In January 2006, when he was just a restless eighteen-year-old hungry for adventure, Paul Rosolie embarked on a journey to the west Amazon that would transform his life.

Venturing alone into some of the most inaccessible reaches of the jungle, he encountered giant snakes, floating forests, isolated tribes untouched by outsiders, prowling jaguars, orphaned baby anteaters, poachers in the black market trade in endangered species, and much more. Yet today, the primordial forests of the Madre de Dios are in danger from developers, oil giants, and gold miners eager to exploit its natural resources.

In Mother of God, this explorer and conservationist relives his amazing odyssey exploring the heart of this wildest place on earth. When he began delving deeper in his search for the secret Eden, spending extended periods in isolated solitude, he found things he never imagined could exist. "Alone and miniscule against a titanic landscape I have seen the depths of the Amazon, the guts of the jungle where no men go," Rosolie writes. "But as the legendary explorer Percy Fawcett warned, 'the few remaining unknown places of the world exact a price for their secrets.'"