The Great Divorce: A Nineteenth-Century Mother's Extraordinary Fight Against Her Husband, the Shakers, and Her Times (MP3 CD) 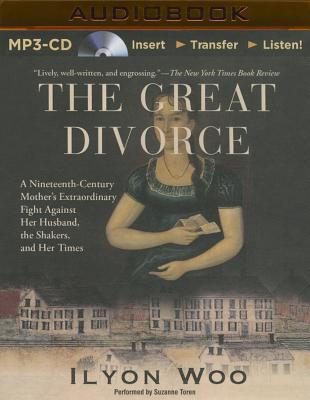 The Great Divorce: A Nineteenth-Century Mother's Extraordinary Fight Against Her Husband, the Shakers, and Her Times (MP3 CD)

Ilyon Woo's The Great Divorce is the dramatic, richly textured story of one of 19th-century America's most infamous divorce cases, in which a young mother singlehandedly challenged her country's notions of women's rights, family, and marriage itself.

In 1814 Eunice Chapman came home to discover that her three children had been carried off by her estranged husband. He had taken them, she learned, to live among a celibate, religious people known as the Shakers. Defying all expectations, this famously petite and lovely woman mounted an epic campaign against her husband, the Shakers, and the law. In its confrontation of some of the nation's most fundamental debates--religious freedom, feminine virtue, the sanctity of marriage--her case struck a nerve with an uncertain new republic. And its culmination--in a stunning legislative decision and a terrifying mob attack--sent shockwaves through the Shaker community and the nation beyond.

With a novelist's eye and a historian's perspective, Woo delivers the first full account of Eunice Chapman's remarkable struggle. A moving story about the power of a mother's love, The Great Divorce is also a memorable portrait of a rousing challenge to the values of a young nation.