The Land of Little Rain (Paperback) 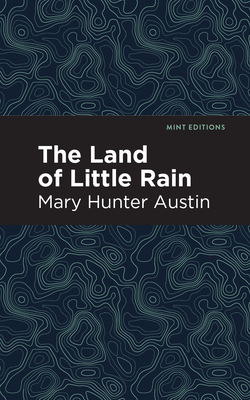 The Land of Little Rain (Paperback)

The Land of Little Rain (1903) is a collection of essays and short stories by Mary Hunter Austin. Originally published with photographs taken by acclaimed American photographer Ansel Adams, The Land of Little Rain is a classic work of nature writing. Austin is now recognized as an early feminist and conservationist who understood the intricacy and fragility of ecosystems as well as the extent to which human civilization threatens their continued existence.

In a series of stories and essays on the animals, landscapes, and peoples that make up the American Southwest, Mary Hunter Austin proves that the foremost responsibility of a writer is to look. With an attentive and deeply respectful eye, Austin describes the heat and violence of desert weather, the tracks made by disparate animal species as they travel in search of water, and the scavengers that depend on death for life. Within this collection are brief stories about the people and communities scattered throughout the harsh Mojave desert: a miner who longs for wealth and civilization but returns to the wild and unpredictable life of speculation; a Shoshone medicine man captured by the Paiute tribe who misses his people and home; a town where people live simply, depending on nothing but the land and its bounty for their daily existence and abundant happiness. The Land of Little Rain is both informative and moving, an intricate tapestry that celebrates the diversity of life while making an incontrovertible case for its continued preservation.

Mary Hunter Austin was a gifted writer and an environmentalist ahead of her time. In a world faced with the catastrophic effects of a global climate crisis, we need writers such as Austin for not only the wisdom and knowledge they offer, but the monumental change their words can inspire.

With a beautifully designed cover and professionally typeset manuscript, this edition of Mary Hunter Austin's The Land of Little Rain is a classic of American literature and nature writing reimagined for modern readers.