The Book of One Hundred Riddles of the Fairy Bellaria (Hardcover) 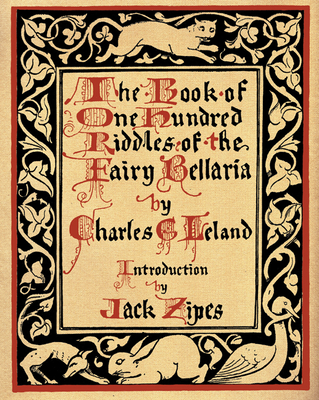 The Book of One Hundred Riddles of the Fairy Bellaria (Hardcover)

Charles Godfrey Leland was one of the most popular American writers and artists of the nineteenth century, publishing more than twenty books of legends, fairy tales, humor, and essays. Today, however, he is a woefully underappreciated writer. Written, designed, and illustrated by Leland in 1892, The Book of One Hundred Riddles of the Fairy Bellaria is a forgotten classic and a small sample of his influential and experimental work.

The Book of One Hundred Riddles of the Fairy Bellaria features the Scheherazade-like fairy goddess Bellaria: powerful and mysterious, courageous and clever, goddess of spring, flowers, love, fate, and death. In this story, Bellaria engages in a duel of wits with an evil king, a death match of one hundred riddles. Each riddle is spoken as a rhyme and illustrated by an original engraving in the arts and crafts style. This book is a beautiful reintroduction to Leland and his pioneering design.

Charles Godfrey Leland (1824–1903) was an American humorist, writer, and folklorist. Primarily known during his lifetime for his comic Hans Breitmann’s Ballads (1871), he wrote extensively on folklore, paganism, and linguistics. He is author of Pidgin-English Sing-Song and Aradia, or the Gospel of the Witches.

Jack Zipes is professor emeritus of German and comparative literature at the University of Minnesota. He is author of more than forty books, including Tales of Wonder: Retelling Fairy Tales through Picture Postcards and Fearless Ivan and His Faithful Horse Double-Hump, both from Minnesota.