Troll Magic: Hidden Folk from the Mountains and Forests of Norway (Hardcover) 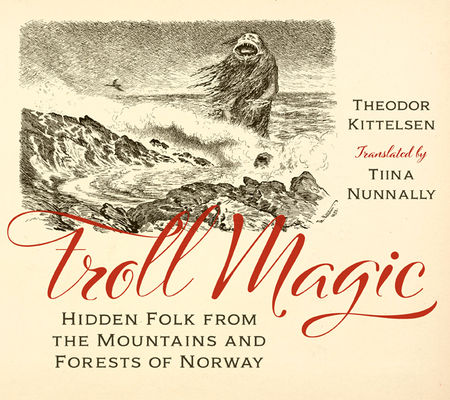 Troll Magic: Hidden Folk from the Mountains and Forests of Norway (Hardcover)

Across the stillness of the sprawling mountain heath, the shadow of the mighty forest falls, its wildness calling to the child in all of us. Here the Hidden Folk assemble: the stalwart little nisse, farmyard spirit and irrepressible prankster; the seductive hulder, with her crown of flowers and cow’s tail; the fiddling fossegrim, summoning the music of wind and water; and most fearsome and enchanting of all, the one-eyed troll, head high above the treetops. A veritable bestiary of Nordic folk creatures was conjured by artist Theodor Kittelsen, whose late nineteenth-century paintings and illustrations gave these macabre and magical figures their enduring forms.

In this book, first published as Troldskab in 1892, Kittelsen spins tales of wonder around creatures rumored to haunt the fields, forests, and waterfalls of Norway. Striding, gamboling, and slithering across these pages are witches and gnomes and sea monsters, fiery dragons waking from their stiff-winged slumber, mermaids rising from the deep, and the sly, shapeshifting nøkk. But first and foremost are the trolls, hapless, horrible, or just plain silly, working their spells and making their mischief to the terror and delight of the presumably human reader.

Tailoring his whimsical artistic style to each tale, Kittelsen’s stories, in Tiina Nunnally’s nimble translation, reveal a Nordic world of wonder, myth, and magic as real as the imagination allows.

Theodor Kittelsen (1857–1914) was one of Norway’s most popular artists and is best known for his paintings and illustrations from Norwegian folklore.

Tiina Nunnally is the award-winning translator of many Scandinavian books, including, most recently, The Complete and Original Norwegian Folktales of Asbjørnsen and Moe and Sigrid Undset’s Olav Audunssøn tetralogy, all published by the University of Minnesota Press.

"Delving into Theodor Kittelsen’s work, I found myself descending into an ancient, mystical world, not unlike that of Tolkien, inhabited by giants, witches, merfolk, and, of course, trolls. But what sets Kittelsen’s work apart from his contemporaries’ is his perceptual authenticity. While other illustrators painted fantastical landscapes and characters, those paintings were mere daydreams for children to play in. Kittelsen documented a skewed moment in reality, almost as if he was witness to the hidden horrors that escaped the senses of common folk. The glowing eyes of the nøkk peering from the bog, the creepy crawly emerging from the woods, and the lone maiden blowing her horn—these are not mere fairytales. These are truths. Dark. Hidden. Truths."—Gris Grimly

"In considering Theodor Kittelsen’s highly captivating Troll Magic—presented here in Tiina Nunnally’s excellent translation and accompanied by Kittelsen’s own inimitable illustrations—I thought less of the iconic fairy tales of Grimm or Andersen and more of the strange, sometimes quirky, always powerful retellings and reshapings of traditional lore by Amos Tutuola in The Palm Wine Drinkard or Lafcadio Hearn in Kwaidan. And yet Kittelsen’s criminally under-known tales of magical beings have a stamp and style all their own, one no doubt informed by being set ‘up north, where the vast, bare surroundings allow the eye and the mind a wild freedom.’ I’m very excited that others will now have a chance to discover, through both word and image, this striking work by a singular imagination. I would wager that most readers, like me, will have a hard time putting it down."—Laird Hunt


"Kittelsen's striking ink drawings are variously haunting and raucous, combining wit and menace in such a way as to anticipate the work of later illustrators, such as Edward Gorey, Maurice Sendak, and Jeffrey Alan Love."—Wall Street Journal