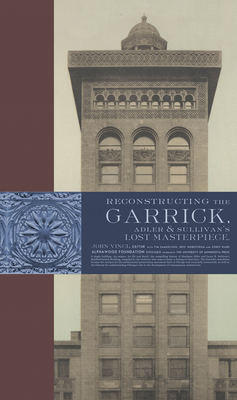 By John Vinci (Editor), Tim Samuleson (With), Eric Nordstrom (With), Chris Ware (With)

For six months in 1961, Richard Nickel, John Vinci, and David Norris salvaged the interior and exterior ornamentation of the Garrick Theater, Adler & Sullivan’s magnificent architectural masterpiece in Chicago’s theater district. The building was replaced by a parking garage, and its demolition ignited the historic preservation movement in Chicago.

The Garrick (originally the Schiller Building) was built in 1892 and featured elaborate embellishments, especially in its theater and exterior, including the ornamentation and colorful decorative stenciling that  would become hallmarks of Louis Sullivan’s career. Reconstructing the Garrick documents the enormous salvaging job undertaken to preserve elements of the building’s design, but also presents the full life story  of the Garrick, featuring historic and architectural photographs, essays by prominent architectural and art historians, interviews, drawings, ephemera from throughout its lively history and details of its remarkable ornamentation—a significant resource and compelling tribute to one of Chicago’s finest lost buildings. A seventy-two-page facsimile of Richard Nickel’s salvage workbook is tipped into the binding.

John Vinci, FAIA, senior partner and practicing architect, Vinci/Hamp Architects, Inc., has been an architect in Chicago for more than sixty years. He taught the history of architecture at the Illinois Institute of Technology and has extensive experience in exhibition curation and design. In 1961 he worked with Richard Nickel to salvage the Garrick Building’s ornament for the City of Chicago.

Tim Samuelson is the administrator of his own lifetime architectural preservation archive, and is the City of Chicago’s cultural historian and former curator of architecture and design at the Chicago Historical Society. Since age seven his primary and long-term interest has been the story of Chicago’s architecture, especially the work of Louis H. Sullivan.

Eric Nordstrom focuses on the documentation of historic building materials from commercial and residential construction; he founded Urban Remains, an extensive and eclectic store of building materials in Chicago, and created the BLDG. 51 museum and gallery, an archive of historically significant architectural artifacts and ephemera.

Chris Ware’s work has appeared in the MCA Chicago, the Whitney Museum of American Art and The New Yorker, and his books have been named year-end top ten fiction selections by the New York Times and Time magazine.