Outback: The Amazing Animals of Australia: A Photicular Book (Hardcover) 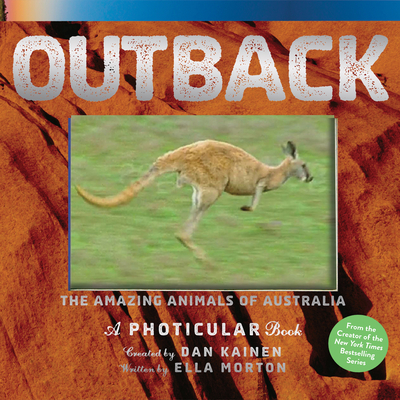 Outback: The Amazing Animals of Australia: A Photicular Book (Hardcover)


Available in Warehouse. Wait for Email Confirmation for ETA
Embark on an eye-opening adventure in the land Down Under, and see eight creatures in astounding motion. From the New York Times bestselling series.

Using Photicular® technology that’s like a 3-D movie on the page, OUTBACK whisks you to the vast, remote world of wild Australia, where heat waves dance forever and animals, isolated by the vagaries of continental drift, are unlike those found anywhere else on Earth.

Each moving image delivers a rich, immersive visual experience—and the result is breathtaking. The kangaroo hops. A wombat waddles. The frilled lizard races on two legs across the desert floor. A peacock spider dances and shows off its vibrant colors. Experience it for yourself!

Dan Kainen is an artist, designer, and inventor living in New York City. He is the creator of the bestselling Photicular books Safari, Ocean,Polar, Jungle, and Wild. His website is DanKainen.com.

While working with some of the pioneers of holography, Dan created a special spotlight that was used by Soho’s Museum of Holography to light holograms. The related field of holography led to Dan’s interest in lenticular art and, in turn, after nearly a decade of research and experimentation, to the creation of his “Motion Viewer,” his third patent in that field and the inspiration for Safari and the other Photicular books.

Ella Morton is a New Zealand-born, Australian-raised, Brooklyn-based writer, focusing on overlooked aspects of history and culture. After covering consumer technology at CNET she hosted Rocketboom NYC, a web show about New York’s quirkier people and places. Her most popular interview was a chat with Cookie Monster on the set of Sesame Street. Ella was associate editor at AtlasObscura.com, where she wrote about such topics as tobacco smoke enemas, Victorian streaming music services, and the etiquette of marrying a ghost.
"Whimsical, thought-provoking, and wonderful, Outback dips into one of the world’s most unique landscapes in ways that spark the imagination." —Foreword Reviews, starred review