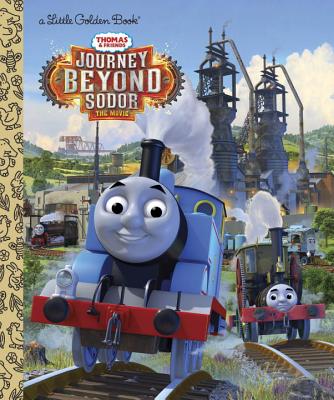 
This title is likely unavailable. Email or call for price and availability.
A Little Golden Book retelling of an all-new Thomas & Friends movie adventure about unusual new engine friends and an exciting—and scary—adventure!

In the early 1940s, a loving father crafted a small blue wooden train engine for his son, Christopher. The stories that this father, the Reverend W Awdry, made up to accompany the wonderful toy were first published in 1945 and became the basis for the Railway Series, a collection of books about Thomas the Tank Engine and his friends—and the rest is history. Thomas & Friends now make up a big extended family of engines and others on the Island of Sodor. They appear not only in books but also in television shows and movies and as a wide variety of beautifully made toys. The adventures of Thomas and his friends, which are always, ultimately, about friendship, have delighted generations of train-loving boys and girls for more than 70 years and will continue to do so for generations to come.
In 1942, the launch of Little Golden Books revolutionized children’s book publishing by making high-quality picture books available at affordable prices. More than 60 years later, many of the original Golden Book titles are still wildly popular, with The Poky Little Puppy topping the list of ten bestselling children’s books of all time. Golden Books’ backlist is teeming with classics such as Dorothy Kunhardt’s Pat the Bunny, and features the stories and artwork of children’s book legends Mary Blair, Margaret Wise Brown, Richard Scarry, Eloise Wilkins, Garth Williams, and many more. Today, the Golden Books imprint includes an array of storybooks, novelty books, and coloring and activity books featuring all of the most popular licenses, including Disney, Nickelodeon, Barbie, Thomas & Friends, The Cat in the Hat, Sesame Street, Marvel Super Heroes, and DC Super Friends. Golden Books continues to reissue the best of its backlist in a variety of formats, including ebooks and apps, as well as bringing out brand-new books in these evolving new formats.

Tommy Stubbs is an illustrator. His works include The Birthday Express!, A Crack in the Track, and Blue Mountain Mystery.