Thomas at the Steelworks/Friends to the Rescue (Thomas & Friends: Journey Beyond Sodor) (Pictureback(R)) (Paperback) 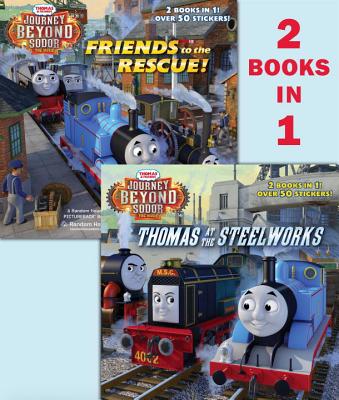 Thomas at the Steelworks/Friends to the Rescue (Thomas & Friends: Journey Beyond Sodor) (Pictureback(R)) (Paperback)


This title is likely unavailable. Email or call for price and availability.
A Thomas & Friends 2-in-1 storybook based on an all-new movie adventure—with stickers!

Two Thomas & Friends books in one—plus stickers! Train-loving boys and girls ages 3 to 7 will be thrilled by this beautifully illustrated storybook based on an all-new Thomas & Friends movie adventure.

In the early 1940s, a loving father crafted a small blue wooden train engine for his son, Christopher. The stories that this father, the Reverend W Awdry, made up to accompany the wonderful toy were first published in 1945 and became the basis for the Railway Series, a collection of books about Thomas the Tank Engine and his friends—and the rest is history. Thomas & Friends now make up a big extended family of engines and others on the Island of Sodor. They appear not only in books but also in television shows and movies and as a wide variety of beautifully made toys. The adventures of Thomas and his friends, which are always, ultimately, about friendship, have delighted generations of train-loving boys and girls for more than 70 years and will continue to do so for generations to come.
Established in July 2013 in a merger between Penguin and Random House, Penguin Random House, with nearly 250 independent imprints and brands on five continents, more than 15,000 new titles published each year, and close to 800 million print, audio, and eBooks sold annually, is the world’s leading trade book publisher. Like its predecessor companies, Penguin Random House is committed to publishing adult and children’s fiction and nonfiction print editions and is a pioneer in digital publishing. Its publishing lists include more than 60 Nobel Prize laureates and hundreds of the world’s most widely read authors.