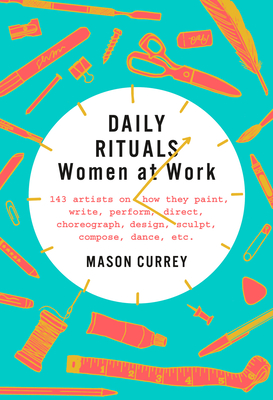 More of Mason Currey's irresistible Daily Rituals, this time exploring the daily obstacles and rituals of women who are artists--painters, composers, sculptors, scientists, filmmakers, and performers. We see how these brilliant minds get to work, the choices they have to make: rebuffing convention, stealing (or secreting away) time from the pull of husbands, wives, children, obligations, in order to create their creations.


From those who are the masters of their craft (Eudora Welty, Lynn Fontanne, Penelope Fitzgerald, Marie Curie) to those who were recognized in a burst of acclaim (Lorraine Hansberry, Zadie Smith) . . . from Clara Schumann and Shirley Jackson, carving out small amounts of time from family life, to Isadora Duncan and Agnes Martin, rejecting the demands of domesticity, Currey shows us the large and small (and abiding) choices these women made--and continue to make--for their art: Isak Dinesen, "I promised the Devil my soul, and in return he promised me that everything I was going to experience would be turned into tales," Dinesen subsisting on oysters and Champagne but also amphetamines, which gave her the overdrive she required . . . And the rituals (daily and otherwise) that guide these artists: Isabel Allende starting a new book only on January 8th . . . Hilary Mantel taking a shower to combat writers' block ("I am the cleanest person I know") . . . Tallulah Bankhead coping with her three phobias (hating to go to bed, hating to get up, and hating to be alone), which, could she "mute them," would make her life "as slick as a sonnet, but as dull as ditch water" . . . Lillian Hellman chain-smoking three packs of cigarettes and drinking twenty cups of coffee a day--and, after milking the cow and cleaning the barn, writing out of "elation, depression, hope" ("That is the exact order. Hope sets in toward nightfall. That's when you tell yourself that you're going to be better the next time, so help you God.") . . . Diane Arbus, doing what "gnaws at" her . . . Colette, locked in her writing room by her first husband, Henry Gauthier-Villars (nom de plume: Willy) and not being "let out" until completing her daily quota (she wrote five pages a day and threw away the fifth). Colette later said, "A prison is one of the best workshops" . . . Jessye Norman disdaining routines or rituals of any kind, seeing them as "a crutch" . . . and Octavia Butler writing every day no matter what ("screw inspiration").
Germaine de Staël . . . Elizabeth Barrett Browning . . . George Eliot . . . Edith Wharton . . . Virginia Woolf . . . Edna Ferber . . . Doris Lessing . . . Pina Bausch . . . Frida Kahlo . . . Marguerite Duras . . . Helen Frankenthaler . . . Patti Smith, and 131 more--on their daily routines, superstitions, fears, eating (and drinking) habits, and other finely (and not so finely) calibrated rituals that help summon up willpower and self-discipline, keeping themselves afloat with optimism and fight, as they create (and avoid creating) their creations.

MASON CURREY was born in Honesdale, Pennsylvania, and graduated from the University of North Carolina at Asheville. Currey's first book, Daily Rituals: How Artists Work, was published by Alfred A. Knopf in 2013. He lives in Los Angeles.

"This outstanding compendium of women artists at work is an admirably succinct portrait of some distinctly uncommon lives. It is also consistently entertaining and full of insights."