Before We Were Wicked (Paperback) 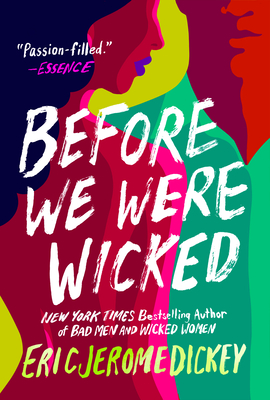 Before We Were Wicked (Paperback)


Available in Warehouse. Wait for Email Confirmation for ETA
From New York Times bestselling author Eric Jerome Dickey, “one of the most successful Black authors of the last quarter-century”* comes a novel about the how one chance meeting can change everything in this thrilling, sexy tale of star-crossed lust.

They say the love of money is the root of all evil, but for Ken Swift, it's the love of a woman.

Ken is twenty-one, hurting people for cash to try to pay his way through college, when he lays eyes on Jimi Lee, the woman who will change the course of his entire life. What's meant to be a one-night stand with the Harvard-bound beauty turns into an explosion of sexual chemistry that neither can quit. And when Jimi Lee becomes pregnant, their two very different worlds collide in ways they never could have anticipated.

*The New York Times
Eric Jerome Dickey (1961–2021) was the award-winning and New York Times bestselling author of twenty-nine novels, as well as a six-issue miniseries of graphic novels featuring Storm (X-Men) and the Black Panther. His novel Sister, Sister was honored as one of Essence’s “50 Most Impactful Black Books of the Last 50 Years,” and A Wanted Woman won the NAACP Image Award in the category of Outstanding Literary Work in 2014. His most recent novels include The Blackbirds, Finding Gideon, Bad Men and Wicked Women, Before We Were Wicked, The Business of Lovers, and The Son of Mr. Suleman.
Praise for Before We Were Wicked

“From wanton to wicked, the love-hate relationship between Dickey's characters burns with rapid-fire dialogue and plenty of steam.”—Kirkus Reviews

“The love story Dickey tells...is potent. Readers will want to read Bad Men and Wicked Women again after being immersed in this edgy, emotional adventure.”—Booklist

“A passion-filled prequel that puts a new spin on the familiar conflicts that have made him a household name.”—Essence

“Dickey has the knack for creating characters who elicit both rage and sympathy.”—Entertainment Weekly