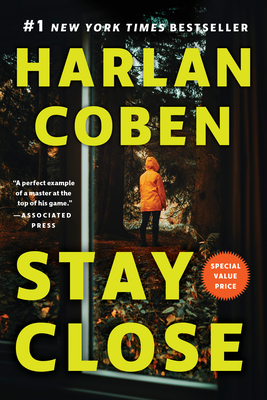 
This title is likely unavailable. Email or call for price and availability.
SOON TO BE A NETFLIX SERIES!

The bestselling author and creator of the hit Netflix drama The Stranger proves that the past never truly fades away in this shocking thriller.

Megan is a suburban soccer mom who once upon a time walked on the wild side. Ray used to be a talented documentary photographer but now finds himself in a dead-end job posing as a paparazzo. Broome is a detective who can’t let go of a cold case. Each is hiding secrets that even those closest to them would never suspect.

When the terrible consequences of long-ago events threaten to ruin their quiet suburban lives, they will come to the startling realization that they may not want to forget the past at all. As Megan, Ray, and Broome are faced with the excitement of temptation and the desperation and hunger that can lurk behind even the prettiest facades—they will discover a hard truth: the line between one kind of life and another can be as whisper-thin as a heartbeat.
With more than seventy million books in print worldwide, Harlan Coben is the #1 New York Times bestselling author of thirty novels, including the Myron Bolitar series and a series aimed at young adults featuring Myron's newphew, Mickey Bolitar. His books are published in forty-three languages around the globe and have been number one bestsellers in more than a dozen countries. The winner of the Edgar, Shamus, and Anthony Awards, he lives in New Jersey.
Praise for Stay Close

“Funnier and darker than many Coben thrillers, and packs a lot of surprises.”—People (4 Stars)

“When everything explodes, the payoff is glorious. Stay Close is a perfect example of a master at the top of his game.”—Associated Press

“The story is intense, the characters are interesting, and the writing is magnificent.”—The Huffington Post

“Coben again shows his acumen for delving into our most intimate fears as he moves his engrossing story from quiet domesticity to sheer terror.”—South Florida Sun-Sentinel

“With Mr. Coben’s combination of thrills and intelligence, he leads readers into the ‘dark side’ of life and delivers his trademark style of exhilarating and captivating writing in a true novel of suspense.”—Suspense Magazine

“Masterful...Coben writes with wit and irony, and his flair for exposing the frail balance point between order and chaos in our lives has never been stronger than in this suspenseful outing.”—Publishers Weekly (starred review)

“[A] tour-de-force...giv[es] the reader a steady steam of jolts and sinking feelings...Satisfying on every level.”—Booklist (starred review)