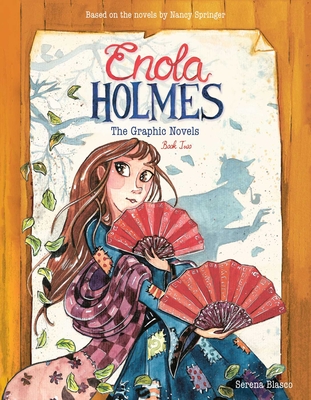 This is book number 2 in the Enola Holmes series.

In Book 2 of the series, Enola is back on the case, deciphering clues and developing leads in each of three new mysteries. What she doesn’t know is that she, too, is being pursued—by her own brother! Once again, Sherlock Holmes’ brilliant, strong-willed younger sister takes center stage in this delightfully drawn graphic novel based on Nancy Springer’s bestselling mystery series.

London, 1889. A woman is being held prisoner while she awaits a forced marriage. Another has been kidnapped, and yet another disappears…

As Enola seeks to rescue the three women, her brother embarks on a quest of his own. When Sherlock receives a mysterious package, he knows he’ll need Enola’s help to decipher its meaning. In the end, the three Holmes siblings will have to work together to answer the question that started it all: What happened to their mother?

Serena Blasco was born in France and studied at the School of Applied Arts in Aix-en-Provence, worked as a graphic designer, and published her first comics work in 2014. She began illustrating the adaptation of Nancy Springer's Enola Holmes novels in 2015.