Waterloo: The Truth at Last: Why Napoleon Lost the Great Battle (Hardcover) 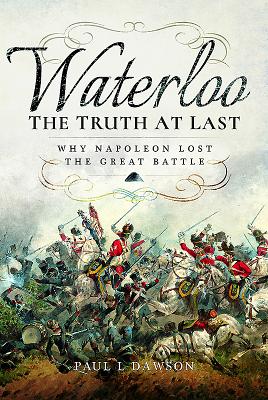 Waterloo: The Truth at Last: Why Napoleon Lost the Great Battle (Hardcover)


This title is likely unavailable. Email or call for price and availability.
During October 2016 Paul Dawson visited French archives in Paris to continue his research surrounding the events of the Napoleonic Wars. Some of the material he examined had never been accessed by researchers or historians before, the files involved having been sealed in 1816\. These seals remained unbroken until Paul was given permission to break them to read the contents. Forget what you have read about the battle on the Mont St Jean on 18 June 1815; it did not happen that way. The start of the battle was delayed because of the state of the ground - not so. Marshal Ney destroyed the French cavalry in his reckless charges against the Allied infantry squares - wrong. The stubborn defense of Hougoumont, the key to Wellington's victory, where a plucky little garrison of British Guards held the farmhouse against the overwhelming force of Jerome Bonaparte's division and the rest of II Corps - not true. Did the Union Brigade really destroy d'Erlon's Corps, did the Scots Greys actually attack a massed French battery, did La Haie Sainte hold out until late in the afternoon? All these and many more of the accepted stories concerning the battle are analysed through accounts (some 200 in all) previously unpublished, mainly derived through French sources, with startling conclusions. Most significantly of all is the revelation of exactly how, and why, Napoleon was defeated. Waterloo, The Truth at Last demonstrates, through details never made available to the general public before, how so much of what we think we know about the battle simply did not occur in the manner or to the degree previously believed. This book has been described as 'a game changer', and is certain to generate enormous interest, and will alter our previously-held perceptions - forever.