Wellington's Foot Guards at Waterloo: The Men Who Saved the Day Against Napoleon (Hardcover) 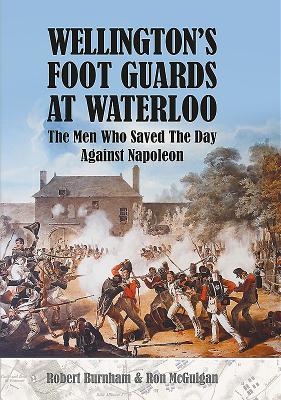 Wellington's Foot Guards at Waterloo: The Men Who Saved the Day Against Napoleon (Hardcover)


This title is likely unavailable. Email or call for price and availability.
During the Waterloo Campaign, Wellington had only one division that was composed entirely of British infantry, the 1st Division. This consisted of two brigades of the most famous regiments of the British Army - the three regiments of Guards.

The exploits of the Guards at Waterloo have passed into legend. On that day, Wellington entrusted the most crucial part of his line to the men he knew would hold their position at all cost. That vital position was the Ch teau d'Hougoumont, and those men were the Guards.

As the great battle unfolded, the French threw more and more troops at the walls of Hougoumont, setting some of the Ch teau's buildings on fire and almost forcing their way in through its northern gateway. Though almost an entire French corps was engaged in the struggle for Hougoumont, the detachment of the Guards valiantly resisted every attack.

Then, as the battle reached its climax, Napoleon launched his Imperial Guard at the center of Wellington's line. Just as the French believed that victory was in their grasp, up stood the 1st Guards Brigade to deliver a devastating volley, followed by a ferocious bayonet charge from which the French never recovered.

The experienced duo of Robert Burnham and Ron McGuigan have compiled the first comprehensive study of the Guards Division throughout the entire Waterloo campaign, from the initial deployment in Belgium to the Occupation of Paris. The book also includes an explanation of the organisation and composition of the two brigades and personal details of many of the Guards' officers - the men who saved the day at Waterloo.