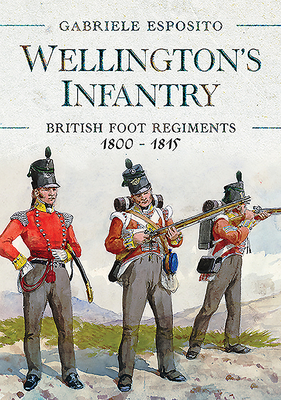 
This title is likely unavailable. Email or call for price and availability.
The period covered in this book is one of the most famed and glorious for the British Army and the infantry was its backbone. Gabriele Esposito examines how the foot regiments were reformed and evolved to absorb the lessons of defeat in America and setbacks elsewhere to become the efficient and dependable bedrock of victory in the Napoleonic Wars. He details the uniforms, equipment and weapons of the infantry, along with their organization and tactics. Chapters are devoted to the Guards, the line regiments of foot, the Light Infantry and Rifles as well as Highland and Lowland Scots regiments.

The author considers not only those units serving with Wellington in the Peninsular War and Waterloo Campaign, but all British infantry units, including those in Canada, the West Indies, India and elsewhere, not forgetting even the home defense Fencibles. Foreign units serving with the British army, most notably the King's German Legion, are also included. The work is lavishly illustrated with color artwork.