The Tarot of Leonora Carrington (Hardcover) 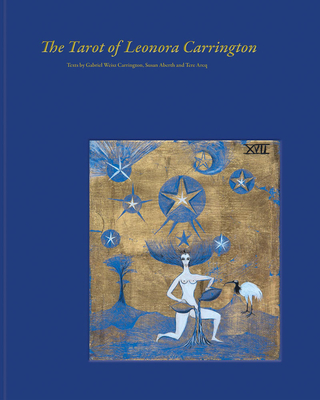 The British-born artist Leonora Carrington is one of the more fascinating figures to emerge from the Surrealist movement. As both a writer and painter, she was championed early by Andr Breton and joined the exiled Surrealists in New York, before settling in Mexico in 1943. The magical themes of Carrington's otherworldly paintings are well known, but the recent discovery of a suite of tarot designs she created for the Major Arcana was a revelation for scholars and fans of Carrington alike. Drawing inspiration from the Tarot of Marseille and the popular Waite-Smith deck, Carrington brings her own approach and style to this timeless subject, creating a series of iconic images. Executed on thick board, brightly colored and squarish in format, Carrington's Major Arcana shines with gold and silver leaf, exploring tarot themes through what Gabriel Weisz Carrington describes as a "surrealist object." This tantalizing discovery, made by the curator Tere Arcq and scholar Susan Aberth, has placed greater emphasis upon the role of the tarot in Carrington's creative life and has led to fresh research in this area.

The Tarot of Leonora Carrington is the first book dedicated to this important aspect of the artist's work. It includes a full-size facsimile of her newly discovered Major Arcana; an introduction from her son, Gabriel Weisz Carrington; and a richly illustrated essay from Tere Arcq and Susan Aberth that offers new insights--exploring the significance of tarot imagery within Carrington's wider work, her many inspirations and mysterious occult sources. Leonora Carrington (1917-2011) was born in Lancashire, England. In 1936, she saw Max Ernst's work at the International Surrealist Exhibition in London, and met the artist the following year. They became a couple almost immediately. When the outbreak of World War II separated them, Carrington fled to Spain, then Lisbon, where she married Renato Leduc, a Mexican diplomat, and escaped to Mexico, where she became close with Remedios Varo and other expat Surrealists.