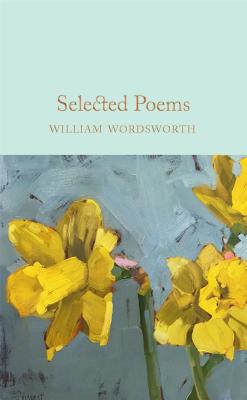 A pioneering poet of the Romantic movement, William Wordsworth was made Poet Laureate in 1843 for his lyrical innovation.

Part of the Macmillan Collector’s Library; a series of stunning, clothbound, pocket sized classics with gold foiled edges and ribbon markers. These beautiful books make perfect gifts or a treat for any book lover. This edition has an introduction by Peter Harness.

Selected Poems contains some of Wordsworth’s most acclaimed and influential works including an extract from his magnus opus, The Prelude, alongside shorter poems such as ‘I Wandered Lonely as a Cloud’, ‘To a Skylark’ and ‘Tintern Abbey’. Wordsworth’s poems, more often than not written at his home in Grasmere in the beautiful English Lake District, are lyrical evocations of nature and divinity. They have a force and clarity of language akin to everyday speech which was revolutionary at the time.

William Wordsworth was born on 7 April 1770 at Cockermouth, in the English Lake District, the son of a lawyer. He was one of five children and developed a close bond with his only sister, Dorothy, whom he lived with for most of his life. At the age of 17, shortly after the deaths of his parents, Wordsworth went to St John’s College, Cambridge, and after graduating travelled to Revolutionary France. Upon returning to England he published his first poem and devoted himself wholly to writing. He became great friends with other Romantic poets and collaborated with Samuel Taylor Coleridge on Lyrical Ballads. In 1843, he succeeded Robert Southey as Poet Laureate and died in the year ‘Prelude’ was finally published, 1850.