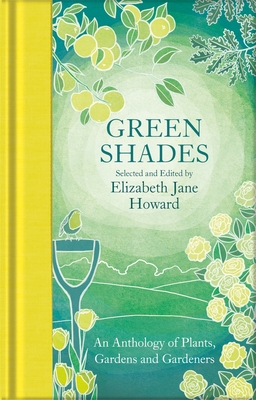 In Green Shades: An Anthology of Plants, Gardens and Gardeners, acclaimed author Elizabeth Jane Howard brings together a fascinating selection of gardening writing that spans the centuries, the seasons and the species.

Part of the Macmillan Collector’s Library; a series of stunning, pocket sized classics with ribbon markers. These beautiful books make perfect gifts or a treat for any book lover.

The contents are delightfully eclectic and wide-ranging – she pays homage to the great English landscape artists of the eighteenth century and to great women gardeners such as Vita Sackville-West. There’s advice from Pliny on how walnuts can be used to dye hair, and Joseph Addison encourages blackbirds to gorge on his cherry trees. Linking the numerous extracts is Elizabeth Jane Howard’s perceptive and highly personal commentary, which skilfully guides the reader from one subject to the next.

The late Elizabeth Jane Howard was the author of fifteen highly acclaimed novels. The Cazalet Chronicles - The Light Years, Marking Time, Confusion, Casting Off and All Change - have become established as modern classics and have been adapted for a major BBC television series and for BBC Radio 4. In 2002 Macmillan published Elizabeth Jane Howard's autobiography, Slipstream. In that same year she was awarded a CBE in the Queen's Birthday Honours List. She died, aged ninety, at home in Suffolk on 2 January 2014.