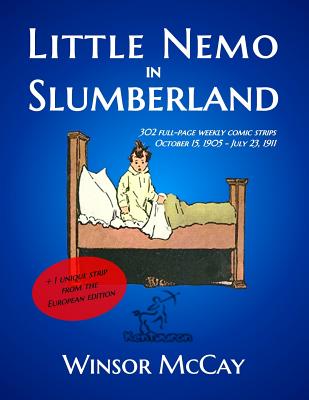 
Backordered - ETA Unknown
This book cannot be returned, cancelled, or exchanged. Please call for availability and pricing
Little Nemo is a fictional character created by American cartoonist Winsor McCay. Nemo was originally the protagonist of the comic strip Little Nemo in Slumberland. The full-page weekly comic strip depicted Nemo having fantastic dreams that were interrupted by his awakening in the final panel. The strip is considered McCay's masterpiece for its experiments with the form of the comics page, its use of color, its timing and pacing, the size and shape of its panels, perspective, architectural and other detail. Little Nemo in Slumberland ran in the New York Herald from October 15, 1905, until July 23, 1911 for a total of 302 full-page weekly comic strips; the strip was renamed In the Land of Wonderful Dreams when McCay brought it to William Randolph Hearst's New York American, where it ran from September 3, 1911 until July 26, 1914 for other 118 full-page weekly comic strips including one that was published on the Los Angeles Examiner. When McCay returned to the Herald in 1924, he revived the strip, and it ran under its original title from Aug 3, 1924, until December 26, 1926, when McCay returned to Hearst. This book contains the complete full color reprints of the New York Herald 302 full-page weekly comic strips, from October 15, 1905, until July 23, 1911; plus 1 strip published on the European edition on January 7, 1906. The New York American 118 full-page weekly comic strips are not included. Volume two is here: http: //www.amazon.com/dp/1530540488/ Note: If texts of some pages are too small to read, please send an email directly to Kentauron Publishers (kentauron@kentauron.com). You'll receive the transcript of those pages, and, when ready, the eBook edition.
Zenas Winsor McCay (c. 1867-71 or September 26, 1869 - July 26, 1934) was an American cartoonist and animator. He is best known for the comic strip Little Nemo (1905-14; 1924-26) and the animated film Gertie the Dinosaur (1914). For contractual reasons, he worked under the pen name Silas on the comic strip Dream of the Rarebit Fiend. In his drawing, McCay made bold, prodigious use of linear perspective, particularly in detailed architecture and cityscapes. He textured his editorial cartoons with copious fine hatching, and made color a central element in Little Nemo. His comic strip work has influenced generations of cartoonists and illustrators. The technical level of McCay's animation-its naturalism, smoothness, and scale-was unmatched until Walt Disney's feature films arrived in the 1930s. He pioneered inbetweening, the use of registration marks, cycling, and other animation techniques that were to become standard.