Our Laundry, Our Town: My Chinese American Life from Flushing to the Downtown Stage and Beyond (Hardcover) 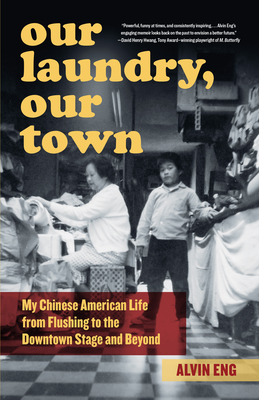 Our Laundry, Our Town: My Chinese American Life from Flushing to the Downtown Stage and Beyond (Hardcover)

With humor and grace, the memoir of a first-generation Chinese American in New York City.

Our Laundry, Our Town is a memoir that decodes and processes the fractured urban oracle bones of Alvin Eng's upbringing in Flushing, Queens, in the 1970s. Back then, his family was one of the few immigrant Chinese families in a far-flung neighborhood in New York City. His parents had an arranged marriage and ran a Chinese hand laundry. From behind the counter of his parents' laundry and within the confines of a household that was rooted in a different century and culture, he sought to reconcile this insular home life with the turbulent yet inspiring street life that was all around them--from the faux martial arts of TV's Kung Fu to the burgeoning underworld of the punk rock scene. In the 1970s, NYC, like most of the world, was in the throes of regenerating itself in the wake of major social and cultural changes resulting from the counterculture and civil rights movements. And by the 1980s, Flushing had become NYC's second Chinatown. But Eng remained one of the neighborhood's few Chinese citizens who did not speak fluent Chinese. Finding his way in the downtown theater and performance world of Manhattan, he discovered the under-chronicled Chinese influence on Thornton Wilder's foundational Americana drama, Our Town. This discovery became the unlikely catalyst for a psyche-healing pilgrimage to Hong Kong and Guangzhou, China--his ancestral home in southern China--that led to writing and performing his successful autobiographical monologue, The Last Emperor of Flushing. Learning to tell his own story on stages around the world was what proudly made him whole. As cities, classrooms, cultures, and communities the world over continue to re-examine the parameters of diversity, equity, and inclusion, Our Laundry, Our Town will reverberate with a broad readership.
Alvin Eng is a native NYC playwright, performer, acoustic punk rock raconteur, and educator. His plays and performances have been seen Off-Broadway and throughout the United States as well as in Paris, Hong Kong, and Guangzhou, China. Eng is the editor of the oral history/play anthology, Tokens? The NYC Asian American Experience on Stage. His plays, lyrics, and memoir excerpts have also been published in numerous anthologies. His storytelling and commentary have been broadcast and streamed on National Public Radio, among others.