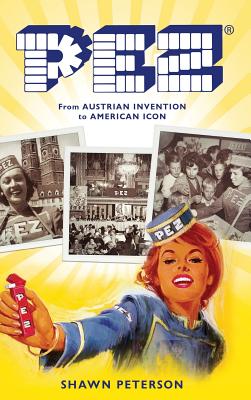 
Available in Warehouse. Wait for Email Confirmation for ETA
This book cannot be returned, cancelled, or exchanged. Please call for availability and pricing
PEZ is an American classic and a staple of many childhood memories. Yet it originated in Austria, where PEZ began in 1927 as compressed peppermint tablets marketed as an alternative to smoking. Upon arrival in the United States in 1952, PEZ quickly took a new direction, adding fruit flavors and three-dimensional character heads to top the dispensers. Now produced in Orange, Connecticut, the iconic PEZ brand is available in over eighty countries, selling more than sixty-five million dispensers annually and inspiring collectors and fans worldwide. Join the world's first and only official PEZ historian, Shawn Peterson, on a journey of sweet proportions for an inside look at the world's most cherished interactive candy.