The Return: Confessions of a "terminal expat" upon returning to the homeland after thirty years (Paperback) 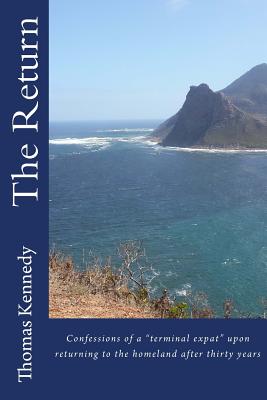 The Return: Confessions of a "terminal expat" upon returning to the homeland after thirty years (Paperback)


Available in Warehouse. Wait for Email Confirmation for ETA
This book cannot be returned, cancelled, or exchanged. Please call for availability and pricing
Something magical sets apart those of us who dream of an overseas life, working to make it a reality and those who remain content to stay in their home country. Not to imply that one group is superior to the other, but the curiosity of far off places has been a strong influence on my life and I became determined to follow that curiosity to fruition. The dream of living and working overseas is held by many but experienced by only a few; the excitement of following one's profession in some exotic foreign land is certainly a strong lure for many people. There is the issue of adjustment is to life in a foreign country, but what about when they come home? This is often the most difficult adjustment to make yet is greatly misunderstood and ignored by many "overseas enthusiasts" as well as the companies that send them to these exotic lands. My curiosity and lack of contentment to "stay home" burned strongly in my soul. I was one of the lucky ones. I made for myself the opportunities to live overseas for thirty years. I felt comfortably "at home" in my adopted country, but I began to feel a stranger during short return trips to the USA, comfortable only in the knowledge that soon I would return to my safe haven overseas. I even had a feeling of superiority, knowing that I did not have to stay here and soon would be winging my way across the South Atlantic Ocean to my seaside refuge at the tip of South Africa where the two oceans meet. This book "The Return" describes my life abroad and the difficulties when faced with repatriation back to the United States. Many expats returning from extensive overseas assignments encounter this difficult adjustment process; "home" has changed, the expat has changed and often the perspective of the "home country" has changed. I don't think that I, or anyone else, has a cure for this condition; I have written these pages to demonstrate that it is indeed real, how deeply it has affected me and that other expats should recognize it and be prepared, in the best way they can. I have had a passion for railways from a very early age and this became an important feature of my life, prompting my urge for overseas adventures and of my thirty - year stay in South Africa. I describe this passion in some detail in this book as it provides the key to why the "overseas life" became so ingrained in me; it had become the "drug" that sustained my existence. There were also significant political events unfolding in South Africa during my stay that needed to be included in this book as they affected many peoples' perceptions of that country and the everyday life of its residents. I have also added many personal anecdotes regarding my life in that country and some of the more notable political intrigues that have shaped the former "land of Apartheid".
Thomas Kennedy left the United States for South Africa in 1981 for a three - year contract and returned thirty years later. During this period of estrangement from his home country he felt totally at home in his new adopted "homeland" and a stranger during return visits to the United States. Upon permanently relocating back "home" four years ago, he felt the pangs of regret and the "repatriation blues" associated with the "dark side" of coming home. He is still in the process of adapting to his new life "back home" and continues his career as an international transport economist. He also has authored three books about exotic rail travel: "The Cape to Cairo Rail Journey"; "Historical Sketches of Railway Development in China" and "Japan: Railway Adventures in the Land of the Rising Sun". All are available through Amazon and can be found on his website: www.thomaslkennedy.com