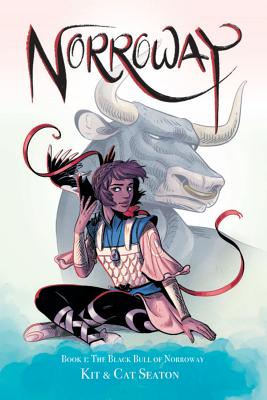 Sibylla has always been prothesized to marry the black bull of Norroway, a knight so bloodthirsty he was cursed to live as a bull. When he shows up, claiming her as his wife and telling her to prepare for a long journey, she isn’t surprised. She is however, surprised to learn that there is more to his curse than is told.

The Black Bull of Norroway is the first graphic novel in the Norroway series. The plot is based on a Scottish fairy tale, and reminiscent of Beauty and the Beast. Short but very sweet, it was a very fun read, both through the art and the writing.

The art style alone is worth the read, it aided in making the entire book feel wonderfully whimsical. This could just be because Beauty and the Beast was on my mind, but the art definitely reminded me of Disney. The clothing looked very flowy and light, and every movement felt fluid. The characters were drawn amazingly, each design unique and detailed. The buildings were especially well drawn. There were a couple of drawings that I spent a couple minutes looking at the architecture and details of the buildings instead of actually reading the book.

Adding to the great art, the storytelling is great. It’s a retelling, but it adds its own flavor and spice to the original. The characters were fleshed out in a new way and it felt like a completely new story. The personality of every character is thoroughly developed and explored. It doesn’t just retell the story, it adds much more to it.

I do have a very minor critic. The characters physical design was unique, but some of the characters felt cliche. They didn’t really offer anything unique from other books’ characters. Sibylla has a bit of a flat personality, which is kind of expected because there wasn’t much time to develop her character but I do hope that in the next book we will see that more.

I really liked this one, and I definitely want more of it. It’s short, but still manages to progress the plot enough to invest readers. I think the next book has a lot to offer and I’m interested to see how it turns out. I’d give The Black Bull of Norroway a ⅘ and will be looking out for the second book.

— From The Black Bull of Norroway by Cat Seaton

The Chicago Public Library's Best of the Best Books 2018 Sibylla always wanted adventure, but she didn't know it would come in the form of a giant, magical bull. Is he a man or a monster? And who knew a prophecy could be so literal? The first title in a new series co-created by sibling writer/artist team CAT SEATON and KIT SEATON, begins the adventure of a lifetime.