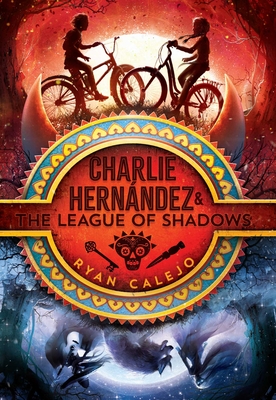 This is book number 1 in the Charlie Hernández series.

“A perfect pick for kids who love Rick Riordan.” —Booklist (starred review)
“A winner for all kids, but it will be especially loved by Latinx and Hispanic families.” —Kirkus Reviews (starred review)

The Lightning Thief meets the Story Thieves series in this middle grade fantasy inspired by Hispanic folklore, legends, and myths from the Iberian Peninsula and Central and South America.

Charlie Hernández has always been proud of his Latin American heritage. He loves the culture, the art, and especially the myths. Thanks to his abuela’s stories, Charlie possesses an almost encyclopedic knowledge of the monsters and ghouls who have spent the last five hundred years haunting the imaginations of children all across the Iberian Peninsula, as well as Central and South America. And even though his grandmother sometimes hinted that the tales might be more than mere myth, Charlie’s always been a pragmatist. Even barely out of diapers, he knew the stories were just make-believe—nothing more than intricately woven fables meant to keep little kids from misbehaving.

But when Charlie begins to experience freaky bodily manifestations—ones all too similar to those described by his grandma in his favorite legend—he is suddenly swept up in a world where the mythical beings he’s spent his entire life hearing about seem to be walking straight out of the pages of Hispanic folklore and into his life. And even stranger, they seem to know more about him than he knows about himself.

Soon, Charlie finds himself in the middle of an ancient battle between La Liga, a secret society of legendary mythological beings sworn to protect the Land of the Living, and La Mano Peluda (a.k.a. the Hairy Hand), a cabal of evil spirits determined to rule mankind. With only the help of his lifelong crush, Violet Rey, and his grandmother’s stories to guide him, Charlie must navigate a world where monsters and brujas rule and things he couldn’t possibly imagine go bump in the night. That is, if he has any hope of discovering what’s happening to him and saving his missing parents (oh, and maybe even the world).

No pressure, muchacho.
Ryan Calejo is the author of the Charlie Hernández series. He was born and raised in south Florida, where he graduated from the University of Miami with a BA. He teaches swimming to elementary school students, chess to middle school students, and writing to high school students. Having been born into a family of immigrants and growing up in the so-called “Capital of Latin America,” Ryan knows the importance of diversity in our communities and is passionate about writing books that children of all ethnicities can relate to.
"Filled with action with fast-paced chapters, Calejo's novel is sure to draw in readers and introduce them to the magic, beauty, and history of Hispanic myths and legends (many of which are elaborated on further in a glossary for those unfamiliar with the stories). This is a perfect pick for kids who love Rick Riordan's many series, particularly for those eager for mythologies beyond Greek and Roman stories."
— Booklist *STARRED REVIEW*

"He's not the "chosen one"—but the bad guys think he is. Mexican-born, American-raised Charlie Hernández just grew horns. And feathers. It's inconvenient. All of a sudden, all the Hispanic (both Latin American and Iberian) myths he learned from his abuela leave the world of legend and reveal themselves in Miami—and everyone, good and bad, seems to be after Charlie. A winner for all kids, but it will be especially beloved by Latinx and Hispanic families who may recognize some of the characters."
— Kirkus, STARRED REVIEW

This magical adventure brings the Hispanic mythologies . . . to life . . . "the detailed attention to various Hispanic folkloric and mythological traditions is accessible to readers new to the legends as well as old hands, and this multicultural story proves to be a satisfying read for anyone interested in fantasy action."
— BCCB

"The story is fast paced and jam-packed with many encounters with mythological creatures loosely based on folklore from around the Spanish-speaking world. The glossary at the end is helpful with a description and country of origin for each mythological being. VERDICT A great start to a new series that will be devoured by fantasy fans who enjoy action with ample doses of mythological inspirations."
— School Library Journal