Light for All (Hardcover) 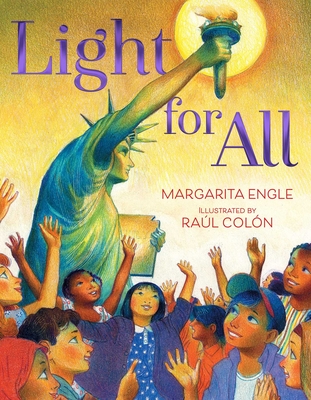 Light for All (Hardcover)

Discover the myriad contributions that all immigrants have made as they come to join family or start their own lives together in a new country they call home. Coming with their hopes, dreams, and determination, generations of immigrants have made the fabric of this country diverse, vivid, and welcoming.

This vibrant and timely celebration demonstrates the thousands of immigrants who built America and the importance of having acceptance and light for everyone.
Margarita Engle is the Cuban American author of many books including the verse novels Rima’s Rebellion; Your Heart, My Sky; With a Star in My Hand; The Surrender Tree, a Newbery Honor winner; and The Lightning Dreamer. Her verse memoirs include Soaring Earth and Enchanted Air, which received the Pura Belpré Award, a Walter Dean Myers Award Honor, and was a finalist for the YALSA Award for Excellence in Nonfiction, among others. Her picture books include Drum Dream Girl, Dancing Hands, and The Flying Girl. Visit her at MargaritaEngle.com.

Raúl Colón has illustrated several highly acclaimed picture books including the New York Times bestselling Angela and the Baby Jesus by Frank McCourt and Susanna Reich’s José! Born to Dance, which received a starred review in Booklist. Mr. Colón lived in Puerto Rico as a young boy and now resides in New City, New York, with his family.
"Will inspire young readers to embody the virtues of Lady Liberty and welcome newcomers with empathy and acceptance."
— Shelf Awareness

The ever constant Statue of Liberty holds “the powerful light / of a mighty lamp / [that] shines / for all!"

She shines as generations of immigrants join their families on our shores with anticipation and fear. She glows for the survivors of war, famine, and natural disasters. Her light radiates around immigrants as they seek acceptance, freedom, and equality. She doesn’t dim or shy away from acknowledging the bitter story of the United States’ cruel beginning; “her light leaps, loops, / weaves, and dances, creating / shared hope / for all.” Newbery honoree and Pura Belpré winner Engle magnificently showcases the immigrant experience, exquisitely bringing stories to life. Her lyrical text is flawlessly amplified by illustrator Colón’s signature deeply saturated hues and crosshatched textures. Arresting double-page spreads invite closer looks, from the harrowing journeys of refugee families to visions of the diverse children—future doctors, artists, and farmers—as they find new paths in a land that isn’t always accepting of those that are different. Even as they acknowledge imperfection, both text and illustrations exalt the Statue of Liberty, which nevertheless “remains a beautiful symbol of freedom and equality, inspiring dreams of feeling welcomed, and of welcoming others.” (This book was reviewed digitally.)

Will inspire young readers to embody the virtues of Lady Liberty and welcome newcomers with empathy and acceptance.
— Kirkus Reviews, STARRED

This picture book shares the general perspective of immigrants with young readers, shining a spotlight on the Statue of Liberty, often revered as a symbol of freedom, equality, and American pride and dreams. On the one hand, Lady Liberty upholds those values here, providing a land of promise and opportunity for immigrant children and families, who are depicted in a range of diverse backgrounds, shapes, and sizes. But Engle, through brief poetic lines, also gives space to the fact that the U.S. has an embroiled history of disenfranchising and mistreating marginalized communities, including Indigenous peoples and African Americans. Colón’s dreamy, textured, and vibrant illustrations, which have a colored-pencil feel, will help readers imagine both the positive and negative aspects of immigration and gain understanding of how young immigrants might feel. Ultimately, the text makes the case that the Statue of Liberty and America provide a beacon of hope for those searching for new opportunities and that, despite the hardships, it’s a beautiful thing to love both your homeland and your new country.
— Booklist