After the Ink Dries (Paperback) 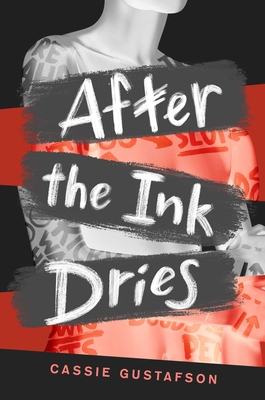 After the Ink Dries (Paperback)


Available in Warehouse. Wait for Email Confirmation for ETA
Courtney Summers meets Deb Caletti in this “all too believable” (Publishers Weekly) page-turning suspense story about a teen girl—reeling in the wake of betrayed trust—who learns what it is to face hard truths about yourself and others, and how to find strength when you need it most.

Sixteen-year-old Erica Walker is a webcomic artist who wants to fit in at her affluent new high school. Seventeen-year-old Thomas VanBrackel is an aspiring songwriter and reluctant lacrosse goalie who wants out from under his father’s thumb. After their electric first kiss at Saturday’s lacrosse match, Erica and Thomas both want to see where their new relationship could take them.

The next morning, however, following a drunken house party, Erica wakes up half-clothed, and discovers words and names drawn in Sharpie in intimate places on her body—names belonging to Thomas’s lacrosse friends, including the boyfriend of Erica’s best friend. Devastated, Erica convinces herself Thomas wasn’t involved in this horrific so-called prank…until she discovers Thomas’s name on her skin, too.

Told in alternating viewpoints, Erica seeks to uncover what happened while battling to keep evidence of her humiliation from leaking out, as Thomas grapples with his actions and who he thought he was. Woven throughout, illustrated graphic novel interstitials depict Erica’s alter ego superhero, Erica Strange, whose courage just might help Erica come through to the other side.
Cassie Gustafson hails from Northern California and majored in words, earning a dual-BA in comparative literature and Spanish at the University of California, Santa Barbara, an MA in English literature at Cal State Fullerton, and an MFA in writing for young adults at Hollins University. Before finding her way to writing, she served high tea at a five-star B&B, tended plants in a lavender greenhouse, nannied, and taught preschool. Cassie enjoys ping-ponging around the globe with her adventurous pilot husband and their fluffy black kitty. Depending on the day, you may find her working on her next novel or toppling over in a yoga class somewhere. Cassie’s work has garnered the PEN New England Susan P. Bloom Discovery Award, the Shirley Henn Creative Writing Award, and the Ruth Landers Glass Scholarship. Visit her at CassieGustafson.com.

From self-publishing to some of the biggest book publishers in the world, Emma Vieceli loves telling stories with pictures and believes that comics should be by anyone, about anything, for everyone. Currently the writer for comic book Life Is Strange, she is perhaps better known as an artist, and her recent work includes Olivia Twist, Alex Rider, The Adventures of Supergirl, Doctor Who, Jem & the Holograms, the New York Times bestselling Vampire Academy graphic novel series, Back to the Future, and Avalon Chronicles. She cocreates the critically acclaimed independent web series, BREAKS with Malin Ryden, cowriting and “comicking” (art/tone/letters). Alongside comics, she worked on the A&E television series, Bates Motel, providing the sketchbook found by Norman Bates, and as an artist with tinyrebel on their Doctor Who Infinity games.
"This all-too-believable book will open eyes and start conversations about sexual assault, toxic masculinity, and victim shaming."
— Publishers Weekly

With heart, art, and a whole lot of emotion, Cassie Gustafson crafts a searing debut, taking place in the aftermath of an event that changes the lives of both main characters forever.
— Rachel Strolle

The beautiful graphics and the way this novel tackles assault head-on make it a good addition to a library shelf.
— School Library Journal