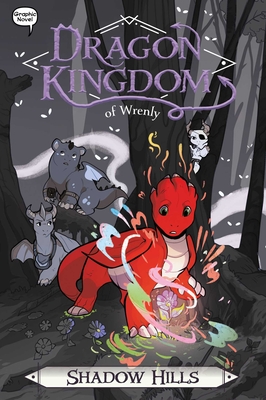 This is book number 2 in the Dragon Kingdom of Wrenly series.

In the second book in the Dragon Kingdom of Wrenly graphic novel series, Ruskin, Cinder, and Groth are back for another exciting quest, this time to save a group of cursed shadow dragons!

A royal errand brings Ruskin, Cinder, and Groth to Shadow Hills, home to the most mysterious creatures in all of Wrenly—the shadow dragons. Legend says that shadow dragons are hostile to outsiders and cannot be trusted. But that’s not how it seems to Ruskin and his friends.

In fact, nothing is quite as it seems in Shadow Hills. The young dragons have been sent there by sinister forces that believe Ruskin is destined to rule over all of Wrenly. These same forces will do anything to prevent that from happening…even if it means putting the entire kingdom at risk. Will Ruskin and his friends see through the deception and learn who they can really trust before it’s too late?
Jordan Quinn grew up in a fairy tale castle in England. It had a spiral stone staircase, a moat, and a dungeon. As a child she liked to play hide-and-go-seek and ride her beloved horse, Prince Charming. When she wasn’t riding, she wrote stories about fairies, trolls, dragons, and wizards. Today, Jordan lives on a ranch in California with her husband, son, and a golden retriever named Sir Toots-a-Lot.