If Your Babysitter Is a Bruja (Hardcover) 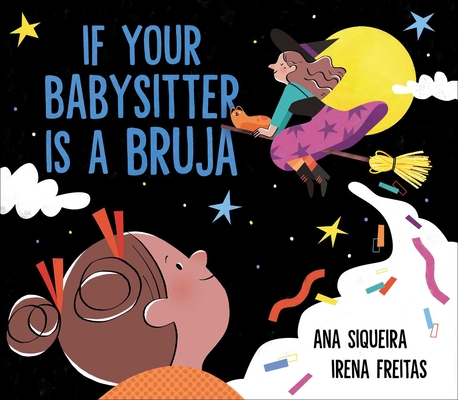 If Your Babysitter Is a Bruja (Hardcover)


Available in Warehouse. Wait for Email Confirmation for ETA
This bouncy, bilingual picture book is an enchanting, rollicking read-aloud for small ones with big imaginations.

On the night before Halloween, a new babysitter might be more than she appears. If she wears a black sombrero and cackles like a crow, she might just be a bruja! One little girl is determined not to fall victim to an evil witch or her cats. She knows bath time is really the bruja’s way of putting her in a boiling cauldron, and the only way to keep her at bay is with a magic potion—or is it?

With a boundless imagination and plenty of tricks up her sleeve, the young protagonist may just have the best night ever!
Ana Siqueira is an award-winning author from Brazil who cackles but doesn’t wear hats. When not flying with brujas, she teaches Spanish to adorable little ones, where she casts a learning spell that nobody can resist. Besides Bella’s Recipe for Success and If Your Babysitter Is a Bruja, Ana has also published a Spanish early reader for the education market. She loves being an abuela and a vovó to her Cuban-Brazilian American grandkids. She lives in Florida with her husband, who just might be a wizard.

Irena Freitas is an award-winning artist and illustrator. She has an MFA in illustration from SCAD and loves illustrating people, funny situations that happen in daily life, and whimsical stories. When she is not reading and illustrating books she likes to travel and visit new places. Irena lives in Manaus, Brazil.
A young girl’s imagination turns her experience with a new babysitter into something fun and spooky in this bilingual picture book. Halloween approaches, and a young girl gives advice to readers on what to look out for if they’re spending a night with a new babysitter...[t]he fun illustrations are a mix of spooky Halloween colors and bright vibrant shades, and the lyrical text with Spanish words and phrases sprinkled throughout make this a perfect choice for all occasions. VERDICT A fun addition to picture book collections for children, and a perfect choice for October reads.
— School Library Journal

"Freitas’ digital art depicts a colorful house full of Halloween decorations and homey details, and the spreads with the bruja on her broom (or bike) are full of whimsical shapes. The characters’ faces are expressive, and it’s clear the child isn't afraid of the maybe-a-witch babysitter. Of course, the joke is “it’s almost Halloween” and the babysitter could just be wearing a witch costume...but do we know for sure?

A fun tale to share during spooky season."
— Kirkus Reviews

As Halloween approaches, an evening with a new babysitter becomes a high-energy adventure in Siqueria’s seasonal story, which incorporates Spanish phrases. Though the sitter rolls up on a bicycle, the book’s second-person narrator sees things with holiday-colored glasses...final scenes sustain the upbeat tone.
— Publishers Weekly