Choo-Choo School: All Aboard for the First Day of School (Board book) 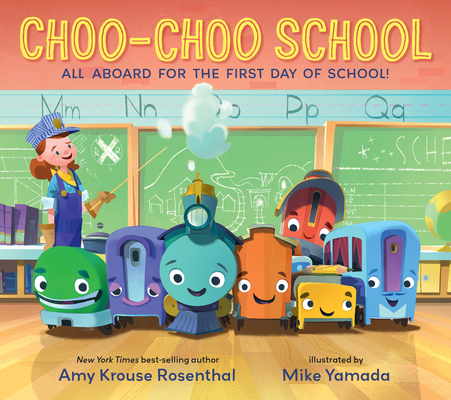 Choo-Choo School: All Aboard for the First Day of School (Board book)


Available in Warehouse. Wait for Email Confirmation for ETA
No racing in the haul-ways! From the late, beloved author Amy Krouse Rosenthal, a look at seven adorable train cars on their first day of school.

All aboard the train-car pool! A new lineup of students is off and rolling to Choo-Choo School. After reciting their classroom rules — Work hard, play fair, be kind — it’s time for some math to get the wheels turning. Then everyone’s ready to climb a hill in gym (it’s good to blow off steam), sing songs in music (Flat Car is a bit off-key), and learn the whole alphabet, especially the letter R. In one of Amy Krouse Rosenthal’s last books, lighthearted verse portrays a world where train stations are classrooms, the conductor doubles as the teacher, and Boxcar is happy to hand out tissues to anyone who ah-choo-choos. Bright, energetic illustrations by animation artist Mike Yamada bring the whole clickety crew to rollicking life.
Amy Krouse Rosenthal wrote more than thirty picture books, including Little Pea and the #1 New York Times bestsellers I Wish You More and Dear Girl, (written with her daughter, Paris Rosenthal). She was a con­tributor to National Public Radio, a TED collaborator and speaker, a filmmaker, a creator of a specialty line of keepsake journals, and the author of two groundbreaking adult memoirs (Encyclopedia of an Ordinary Life and Textbook Amy Krouse Rosenthal). Amy Krouse Rosenthal raised her three children with her husband on a tree­-lined street in Chicago.

Mike Yamada is the author-illustrator of Cool Cat Versus Top Dog and the illustrator of other books for children, including Bedtime Blastoff and Kai to the Rescue! He has also worked as an animator with Disney and Dreamworks, with credits on film projects such as Big Hero 6 and How to Train Your Dragon. He lives in Los Angeles.
Brightly colored cartoonstyle digital illustrations portray this crew as a fun-loving class, eager to learn many of the same things young children would study...This appealing story is a terrific choice to read at the beginning of a school year, or anytime for train-loving children.
—Booklist