The Gendered Politics of Crises and De-Democratization: Opposition to Gender Equality (Hardcover) 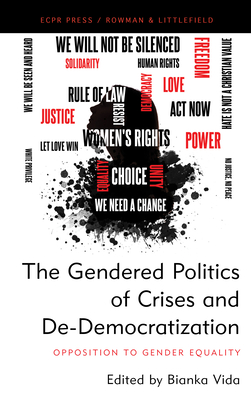 The Gendered Politics of Crises and De-Democratization: Opposition to Gender Equality (Hardcover)


Available for Pre-Order Now
When opposition to gender equality and LGBTQIA+ policies is growing in both Europe and at a global scale with increasing attacks on gender and sexuality norms and violations of women's and other minority groups' rights, it is crucial to further improve the feminist scholarly understanding of opposition to gender+ equality in times of de-democratisation. Gender and the Politics of Crises in Times of De-Democratisation seeks to broaden the current scope of literature on opposition to gender+ equality towards democracy, laws, politics and policymaking procedures. The book focuses on ten case studies, comprising opposition to gender+ equality policies at the EU, regional, local and national levels. With its strong interdisciplinary and original focus on bringing together distinct scholarships and the variety of topics covered, starting from employment policies through gender and representation to gender-based violence, the book is beneficial for not only gender studies students and scholars, but also for feminist activists, political and policy actors and anyone who is interested in achieving social justice.
Bianka Vida is Doctoral Researcher of Politics at the University of Surrey, carrying out research on the impacts of Brexit on gender equality policies at both the UK and EU level.