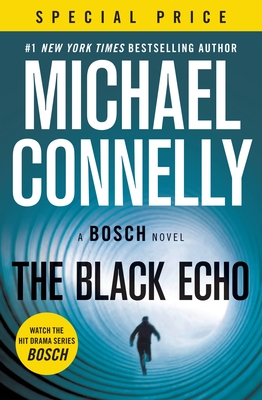 This is book number 1 in the A Harry Bosch Novel series.

An LAPD homicide detective must choose between justice and vengeance as he teams up with the FBI in this "thrilling" novel filled with mystery and adventure (New York Times Book Review).
​

For maverick LAPD homicide detective Harry Bosch, the body in the drainpipe at Mulholland Dam is more than another anonymous statistic. This one is personal . . . because the murdered man was a fellow Vietnam "tunnel rat" who had fought side by side with him in a hellish underground war. Now Bosch is about to relive the horror of Nam. From a dangerous maze of blind alleys to a daring criminal heist beneath the city, his survival instincts will once again be tested to their limit. Pitted against enemies inside his own department and forced to make the agonizing choice between justice and vengeance, Bosch goes on the hunt for a killer whose true face will shock him.
Michael Connelly is the author of twenty-eight previous novels, including #1 New York Times bestsellers The Crossing and The Burning Room.  His books, which include the Harry Bosch series and Lincoln Lawyer series, have sold more than sixty million copies worldwide.  Connelly is a former newspaper reporter who has won numerous awards for his journalism and his novels and is the executive producer of Bosch, starring Titus Welliver.  He spends his time in California and Florida.
"One of those books you read with your knuckles - just hanging on until it's over...good and thrilling." - New York Times Book Review


"It's impossible for Connelly to tell a bad story." - The Arizona Republic


"Michael Connelly writes with a seamless unity of tone and pace that makes reading his crime novels absolutely effortless and totally engaging...his narrative rolls out in a perfect parade of action, memory, emotion, color and tension." - Pittsburgh Post-Gazette