Simply Lies: A can't-miss psychological suspense stand-alone from the author behind the blockbuster hit The 6:20 Man. (Hardcover) 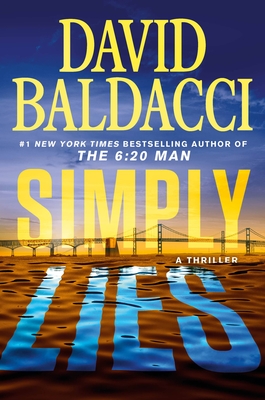 Simply Lies: A can't-miss psychological suspense stand-alone from the author behind the blockbuster hit The 6:20 Man. (Hardcover)

From the #1 New York Times bestselling author of The 6:20 Man comes a twisting new psychological thriller in which two women—one a former detective, the other a dangerous con artist—go head-to-head in an electrifying game of cat and mouse.
Mickey Gibson, single mother and former detective, leads a hectic life similar to that of many moms: juggling the demands of her two small children with the tasks of her job working remotely for ProEye, a global investigation company that hunts down wealthy tax and credit cheats.

When Mickey gets a call from a colleague named Arlene Robinson, she thinks nothing of Arlene’s unusual request for her to go inventory the vacant home of an arms dealer who cheated ProEye’s clients and fled. That is, until she arrives at the mansion to discover a dead body in a secret room—and that nothing is as it seems.

Not only does the arms dealer not exist but the murder victim turns out to be Harry Langhorne, a man with mob ties who used to be in Witness Protection. What’s more, no one named Arlene Robinson works at ProEye.

In the blink of an eye, Gibson has become a prime suspect in a murder investigation—and now her job is also on the line until she proves that she was set up. Before long, Gibson is locked in a battle of wits with a brilliant woman with no name, a hidden past, and unknown motives—whose end game is as mysterious as it is deadly.

DAVID BALDACCI is a global #1 bestselling author, and one of the world's favorite storytellers. His books are published in over forty-five languages and in more than eighty countries, with 150 million copies sold worldwide. His works have been adapted for both feature film and television. David Baldacci is also the cofounder, along with his wife, of the Wish You Well Foundation, a nonprofit organization dedicated to supporting literacy efforts across America. Still a resident of his native Virginia, he invites you to visit him at DavidBaldacci.com and his foundation at WishYouWellFoundation.org.
"David Baldacci is a master storyteller."—Associated Press