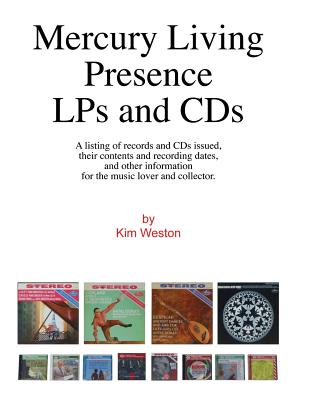 
Available in Warehouse. Wait for Email Confirmation for ETA
This book cannot be returned, cancelled, or exchanged. Please call for availability and pricing
Free email Update available: If you have bought this book on Amazon or eBay or elsewhere, you know it contains information about all Mercury Living Presence recordings. But you can also get a major email Update covering recent complete MLP box sets of Rafael Kubelik, Paul Paray, and Gina Bachauer along with other discs including many performances newly released on CD that had not previously been available. Write to the author at the email address on the copyright page of the book.--------This book is primarily concerned with the classical music catalog of Mercury Living Presence recordings recorded and published by the Mercury Record Corporation. Mercury Records made some of the finest and most natural sounding audio recordings ever made, mostly of excellent and committed performances of classical music. But this is not a history of Mercury records or even of the Living Presence series of recordings. My main focus was to create a list of all the Mercury Living Presence classical records. I am mostly interested in the stereo recordings, but there are also many earlier mono recordings of great interest, too, so I have included those also. Specifically, what is included is information on the SR 90000 series of stereo recordings and the MG 50000 series of mono recordings, but there is also a listing of the Wing classical reissue series. ***** Decades ago, when I began collecting Mercury records, and years later when I started collecting the CDs, I was looking for a complete list of all the Mercury Living Presence records and later the CDs. Though I found some information that was helpful, to get what I wanted, I had to make the list myself. I started with lists of records on the record sleeves of the albums, got some information from The Absolute Sound magazine, and in the internet age, found useful information on several internet sites, but mostly to get the list I wanted, I had to dig up the information and build it myself. Having completed the list, it occurred to me that other collectors might find it helpful, too. So I put together a group of databases and spreadsheets in Microsoft Excel and Microsoft Works database format files and issued the databases I had created on a CD-rom disc in early 2013. By that time I had all the original series of CDs mastered by Wilma Cozart Fine, and many of the records that had been reissued on CD, and virtually all of the stereo records not issued on CD, plus most of the mono records in which I had a strong interest. Now it is available as a book. Among other things it includes the following lists: Complete Mercury Living Presence CDs, including every CD, with its track information, identifying Composer, title, soloist, conductor, orchestra, CD #, LP where originally published, and recording date.Complete Mercury Living Presence LPs including every LP with its track information identifying Composer, title, soloist, conductor, orchestra, LP #, CD on which it was reissued if any, and recording date.Different versions of the files are arranged by: Composer and Title, Recording Date, Record number, and CD number. There are also a listings of LPs and LP tracks that have not been reissued in the Mercury Living Presence CD series. Included are listings of all original Mercury Living Presence records in the SR 90000 and MG 50000 series, all CDs originally mastered by Wilma Cozart Fine, all SACDs, and the more recent reissues and new issues in the large 50+ CD box sets and the 10-CD box sets of Marcel Dupr and Janos Starker. There are also a few chapters of background information, little known facts, and other topics of interest. Hopefully readers will find it interesting and useful.