Life Finds a Way: What Evolution Teaches Us About Creativity (Hardcover) 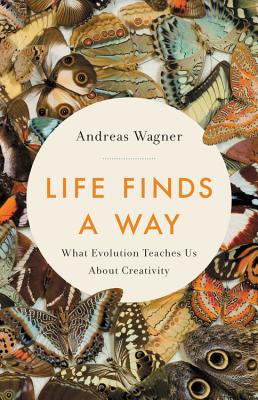 Life Finds a Way: What Evolution Teaches Us About Creativity (Hardcover)


Available in Warehouse. Wait for Email Confirmation for ETA
How the principles of biological innovation can help us overcome creative challenges in art, business, and science
In Life Finds a Way, biologist Andreas Wagner reveals the deep symmetry between innovation in biological evolution and human cultural creativity. Rarely is either a linear climb to perfection--instead, "progress" is typically marked by a sequence of peaks, plateaus, and pitfalls. For instance, in Picasso's forty-some iterations of Guernica, we see the same combination of small steps, incessant reshuffling, and large, almost reckless, leaps that characterize the way evolution transformed a dinosaur's grasping claw into a condor's soaring wing. By understanding these principles, we can also better realize our own creative potential to find new solutions to adversity.
Ultimately, Life Finds a Way offers a new framework for the nature of creativity, enabling us to better adapt, grow, and change in art, business, or science--that is, in life.
Andreas Wagner is a professor and chairman at the Department of Evolutionary Biology and Environmental Studies at the University of Zurich and an external professor at the Santa Fe Institute. He is also the author of four books on evolutionary innovation. He lives in Zurich, Switzerland.
"An impressively brisk intellectual tour"—David Barash, Wall Street Journal

"In this intricate but accessible work, evolutionary biologist Wagner draws a fascinating analogy between how nature innovates to optimize itself and how human creativity works... [Life Finds a Way] provides an intriguing new perspective on the mechanisms of innovation, whether molecule or symphony."—Publishers Weekly

"A
thoughtful search for parallels between biological and human innovation... Wagner
makes an ingenious case."—Kirkus Reviews

"From molecules to moths to mountains, Andreas Wagner's Life Finds a Way weaves a coherent and compelling narrative about how nature achieves creativity. Not only that, we also learn how to cultivate creativity in our own lives, and--perhaps more importantly--how to avoid smothering it with good intentions."—George Dyson, author of Darwin Among the Machines

"In this probing and provocative book, Wagner applies the latest findings about evolution to the workings of human creativity. Finding surprising convergences between evolving species and an active imagination, Wagner persuasively argues that human inventiveness is a reflection not just not of human nature but of nature itself."—Anthony Brandt, co-author of The Runaway Species

"Life Finds a Way presents an impressively broad, tenable, interesting perspective on creativity. Especially compelling is the idea that creativity is something we all share. Too often, creativity is associated with genius, or with the arts, and it is much, much broader than that. As convincing as it is practical, this book explains how creativity has played an enormously significant role in evolution--of humanity and the universe."—Mark Runco, author of Creativity

"Here is the scientific proof for why 'teaching to the test' for standardized testing is hurting our students and jeopardizing our future -- and what can be done about it. Creativity is a necessity not a luxury, says Andreas Wagner. In a tour of genetics, scientific breakthroughs and artistic peaks, he draws parallels to the human processes that generate leaps of progress: analogy-making and metaphor, among others. He makes the definitive case for embedding creative thinking in the classroom, if we are to see the survival of the fittest."—Kerry Ruef, founder of The Private Eye Project

"Andreas Wagner has again cut through to the heart of a vital question. The notion that genomes are set up to explore, through trial and error, in the hope of leaping across the adaptive landscape to new peaks is a fresh concept. Wagner draws out fascinating parallels with the way innovation works in human society."—Matt Ridley, author of The Evolution of Everything and How Innovation Works