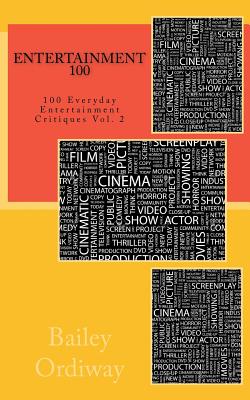 
This title is likely unavailable. Email or call for price and availability.
Entertainment 100 is a collectors edition. A compilation of posts featured on Baileybee.me In March of 2015 Bailey had a realization. If he started an entertainment review site than he would be able to write on a daily basis, even when he is having writers block for his next novel... Bailey's critiques have been described as personable, conversational, and honest. So, open it up and share his taste in Everyday Entertainment. Actor, Book, Documentary, Game, Movie, Music, Stand-up, Trailer, TV and YouTube reviews. Along with Lists, and Articles.
Dropping out of high school at 16 and getting his GED and attending college at 17, Bailey has always had an avid interest in writing from a young age. Writing many stories for papers and school magazines. He grew up mainly around Michigan, eventually settling in the Upper Peninsula. He began writing his first novel "Blackout" right after dropping out of high school and continued writing it while going to college. It was released at the end of his first semester, 2 days before his 18th birthday. Bailey left college to peruse a career in the military and was unfortunately medically discharged shortly afterwords. He now lives in South Dakota where he is building a life.