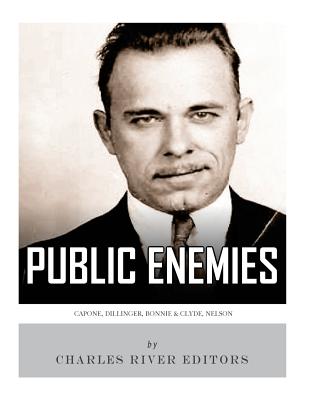 
Available in Warehouse. Wait for Email Confirmation for ETA
This book cannot be returned, cancelled, or exchanged. Please call for availability and pricing
*Covers the lives, crimes, and deaths of the Public Enemies.
*Explains the legends and myths surrounding all of the public enemies in an attempt to separate fact from fiction.
*Includes pictures of important people, places, and events.
*Includes Bibliographies for further reading.
America has always preferred heroes who weren't clean cut, an informal ode to the rugged individualism and pioneering spirit that defined the nation in previous centuries. The early 19th century saw the glorification of frontier folk heroes like Davy Crockett and Daniel Boone. After the Civil War, the outlaws of the West were more popular than the marshals, with Jesse James and Billy the Kid finding their way into dime novels. And at the height of the Great Depression in the 1930s, there were the "public enemies", common criminals and cold blooded murderers elevated to the level of folk heroes by a public frustrated with their own inability to make a living honestly.
In 1933, the Chicago Crime Commission designated the first Public Enemy, and the most famous of them all. Despite his organized crime spree during the '20s, Al Capone was a popular figure in Chicago, viewed by many as a Robin Hood because he took pains to make charitable donations to the city. At the same time, he bribed government officials and cops, ensuring they looked the other way despite his violent ways of doing business. Throughout the decade, Capone was often out in public, despite several attempts on his life, and the gang war between Al Capone and Bugs Moran was well known and even celebrated to an extent. Even to this day, Chicago's gangster past is viewed as part of the city's lore, and tours of the most famous spots in Chicago's gang history are available across the city.
Eventually, J. Edgar Hoover's FBI appropriated the term "Public Enemy" and applied it to outlaws like John Dillinger, Baby Face Nelson, and Bonnie and Clyde.
Two months after Franklin D. Roosevelt's inauguration in 1933, a petty thief who had spent almost a decade behind bars for attempted theft and aggravated assault was released from jail. By the end of the year, that man, John Dillinger, would be America's most famous outlaw: Public Enemy Number One. From the time of his first documented heist in early July 1933, until his dramatic death in late July of the following year, he would capture the nation's attention and imagination as had no other outlaw since Jesse James.
The man who became Public Enemy Number One after the deaths of John Dillinger and Pretty Boy Floyd was Baby Face Nelson, who ran with Dillinger in 1934. Baby Face was a merciless outlier who pulled triggers almost as fast as he lost his temper. By the time fate caught up with Baby Face Nelson in November 1934 at the "Battle of Barrington", a shootout that left his body riddled with nearly 20 bullet holes, he was believed to have been responsible for the deaths of more FBI agents than anybody else in American history.
There was no shortage of well known public enemies like John Dillinger and Baby Face Nelson, but none fascinated the American public as much as Bonnie and Clyde. While the duo and their Barrow Gang were no more murderous than other outlaws of the era, the duo's romantic relationship and the discovery of photographs at one of their hideouts added a more human dimension to Bonnie and Clyde, even as they were gunning down civilians and cops alike. When Bonnie and Clyde were finally cornered and killed in a controversial encounter with police, a fate they shared with many other outlaws of the period, their reputations were cemented.
Public Enemies chronicles the lives, legends, and legacies of America's most famous public enemies. Along with pictures of important people, places, and events, you will learn about Capone, Dillinger, Baby Face, and Bonnie & Clyde like never before.