What's Next?: Creativity in the Age of Entertainment (Paperback) 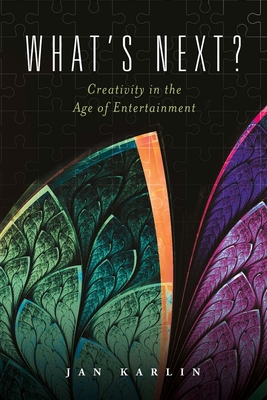 What's Next?: Creativity in the Age of Entertainment (Paperback)


Available in Warehouse. Wait for Email Confirmation for ETA
What's Next? Creativity in the Age of Entertainment details the interconnected causes of the creativity crisis that exists today where a focus on entertainment has confused and compromised our society. Ms. Karlin shares her experiences with creative people and artistic projects, demonstrating how inspiration and imagination coexist across various disciplines. She explores our current Age of Entertainment and how our culture discourages creativity in many fields. The roles of imitation, discipline and cleverness in nurturing creativity skills offer an overview of the creative process. Examples of innovative ideas that led to Grammy Awards and international projects provide a background of program and leadership development. She illustrates her views about the future of arts education and the music business through successful programs around the country. Finally, suggestions are offered to assist creativity development in the arts, philanthropy, business, education and our personal lives toward a new Age of Creativity.
Grammy® Award-winner Jan Karlin is a musician, producer, educator, and cultural entrepreneur. Her book "What's Next? Creativity in the Age of Entertainment" won a 2020 Book Excellence Awards Prize and a 2019 Readers' Favorite International Book Award. She is the founding executive director of the L.A. International New Music Festival, Summer Festival at The Huntington, and Southwest Chamber Music, an ensemble based in southern California. Ms. Karlin has been recognized by the James Irvine Foundation as one of the leading nonprofit executive directors in California. As a violist, she has performed on international stages in the U.S., Europe, Mexico and Asia, including the Musikverein in Vienna, the Hanoi Opera House, UNAM in Mexico City, and REDCAT at Walt Disney Concert Hall in Los Angeles. Ms. Karlin produced the largest cultural exchange and music festival in history between the United States and Vietnam in 2010, supported by the U.S. Department of State. The exchange and festival were covered in the international press, including the Los Angeles Times, Wall St. Journal Asia, Vietnam News, CNN International and Harvard Business Review. Ms. Karlin and her husband, conductor Jeff von der Schmidt, serve as the first American artistic advisors to Vietnam. She has also produced and performed on over thirty compact disc recordings, resulting in nine Grammy nominations and two Awards. Ms. Karlin produced three years of radio broadcasts throughout California that featured concerts and interviews with leading composers and international performers. She has lectured in the U.S. and abroad, and taught at Pomona College at Claremont University. Ms. Karlin received her B.A. from Tufts University and M.A. from Boston University. She and her husband enjoy travel, cooking, and visiting friends and family around the globe.
"By opening the questions of Art as it enters the 21st Century, you have done us an immense kindness of lighting our brains with the questions that - in order to begin to answer the eternal questions of our craft - we need to answer. Your wonderful book is both an eye-opener and a Guide to some of the deepest questions we still must finish."  -Martin Perlich author, broadcaster, voice of the Cleveland Orchestra for George Szell, and 1998 honoree of the Rock and Roll Hall of Fame.

"Your life experience, in the music industry and far beyond, is extraordinary, and obviously a vital platform for this exploration of creativity in these challenging times." -Deanne Urmy