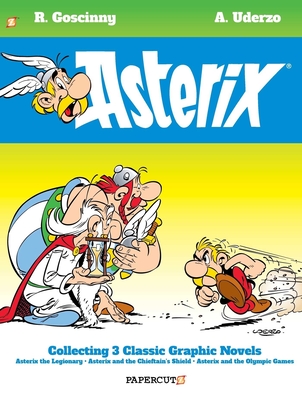 This is book number 4 in the Asterix series.

In “Asterix the Legionary,” one of the three classic Asterix graphic novels collected here, Asterix and Obelix do as the Romans do and join the Roman Legion in hopes to get closer to Obelix’s big crush in the process. Instead, the troops are sent far from Gaul to North Africa. Then, in “Asterix and the Chieftain’s Shield” with the village chief away, Caesar and his men come to play—and get their hands on a priceless Gaul shield! Asterix must foil their search and protect his village. Then Asterix heads to Greece to participate in the Olympic games. But how do the Gauls register themselves? As Romans? And is their powerful potion an ancient form of performance enhancers? It’s an international bout for the ages and just when you think you know what to expect in Asterix, the creators Goscinny and Uderzo throw things at you that you never could’ve imagined.
Includes a new afterword by Alexander Simmons providing historical and cultural context for Asterix, both in 50 B.C. and in the time the classic comics were made addressing various racial depictions
Rene Goscinny was born in Paris in 1926. After growing up in Argentina, he came to America where he shared a studio with future Mad magazine co-founder Harvey Kurtzman and collaborators Will Elder and Jack Davis. In 1959, he founded the magazine Pilote which premiered what was to become the most successful comic series anywhere: Asterix. He died suddenly cardiac arrest in 1977 at the age of 51.

Albert Uderzo was born in France 1927 to Italian Immigrants. In 1959 Goscinny and Uderzo became editor and artistic director (respectively) of Pilote magazine. Their creation, Asterix became a runaway success. After Goscinny's death in 1977, 26 volumes of Asterix were complete, Uderzo continued to write and illustrate the Asterix books on his own, publishing 8 volumes. The cover credits still read "Goscinny and Uderzo.” He retired in 2011 but still oversees Asterix and the current publications by Jean-Yves Ferri and Didier Conrad.