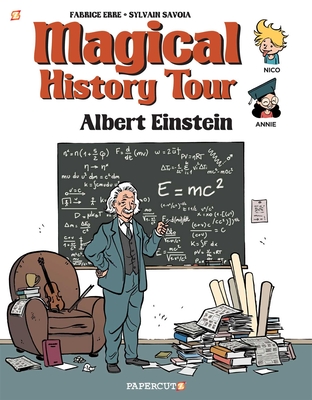 This is book number 6 in the Magical History Tour series.

Modern day kids Annie and Nico go on a magical history tour back to meet one of the greatest minds of the 20th century, Albert Einstein. An important and influential physicist, Einstein revolutionized the way we view the universe. At the height of his scientific career, he was also a committed global citizen, defending human rights while fighting his own personal battles during World War II. Experience the ins and outs of this glorious mind with Annie and Nico as the helpful guides in this pocket-sized book.
Fabrice Erre, born in 1973 in France, is an author and teacher of comics, as well as an accomplished historian. Through his comics, he seeks above all to parody human behavior, teasing out our little personal weaknesses and our vulnerability to manipulation by the masses. Most recently, putting his history background to good use, Erre has teamed up with artist Sylvain Savoia to create the series THE THREAD OF HISTORY, set on bringing the past to vivid life for younger readers.

Born in 1969, Sylvain Savoia grew up in France, and discovered comicbooks at a young age. In 1989, he registered at the Saint-Luc art school in Brussels. Savoia enjoys a prolific international career illustrating comics.