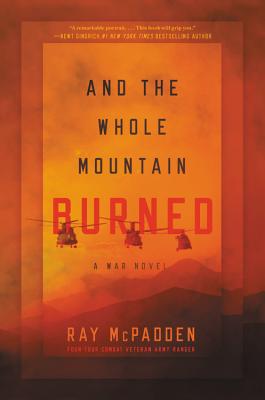 
Backordered - ETA Unknown
Four-tour combat veteran Ray McPadden offers a vivid portrayal of American soldiers facing an unseen enemy and death in the Mountains of Afghanistan.
Sergeant Nick Burch has returned to the crags of tribal Afghanistan seeking vengeance. Burch's platoon has one goal: to capture or kill an elusive insurgent, known as the Egyptian, a leader who is as much myth as he is man, highly revered and guarded by ferocious guerrillas. The soldiers of Burch's platoon look to him for leadership, but as the Egyptian slips farther out of reach, so too does Burch's battle-worn grasp on reality.
Private Danny Shane, the youngest soldier in the platoon, is learning how to survive. For Shane, hunting the Egyptian is secondary. First he must adapt to the savage conditions of the battlefield: crippling heat, ravenous sand fleas, winds thick with moondust, and a vast mountain range that holds many secrets. Shane is soon chiseled by combat, shackled by loyalty, and unflinchingly marching toward a battle from which there is no return. A new enemy has emerged, one who has studied the American soldiers and adapted to their tactics. Known as Habibullah, a teenage son of the people, he stands in brazen defiance of the Ameriki who have come to destroy what his ancestors have built. The American soldiers may be tracking the Egyptian, but Habibullah is tracking them, and he knows these lands far better than they do.
With guns on full-auto, Shane and Burch trek into the deepest solitudes of the Himalayas. Under soaring peaks, dark instinct is laid bare. To survive, Shane and Burch must defeat not just Habibullah's militia but the beast inside themselves.
And the Whole Mountain Burned reveals, in stunning, ruthless detail, the horrors of war, the courage of soldiers, and the fact that no matter how many enemies we vanquish, there is always another just over the next ridge.
Ray McPadden is a four-tour combat veteran and a former Ground Force Commander in an elite unit of Army Rangers. He earned a Purple Heart, two Bronze Stars, and a medal for valor during his combat tours, which included almost two years on the Afghan-Pakistani border during the height of the conflict. He now lives in Gardiner, Montana.

"A gritty new novel dramatizes the human toll of America's longest war. . . . With its nuanced language, And the Whole Mountain Burned transcends a genre that can easily become formulaic. McPadden creates colorful characters, and his plotting captivates the reader. You want to know what happens to these characters-especially the character present in his absence, the Egyptian. The book paints a drab landscape in bold colors, and its suspenseful pace holds up."—City-Journal

"And the Whole Mountain Burned is a gritty novel that exposes both the horrors and heroism of war in ruthless detail. Ray has an excellent descriptive voice and his book makes you feel like you are climbing the valleys of the Hindu Kush with his troops."—American Warrior Radio

"A remarkable portrait of the daily human cost of our longest war. If you want to understand the price our troops pay, this book will grip you."—Newt Gingrich, #1 New York Times bestselling author

"A riveting, raw, rip-roaring saga of endurance, violence and the quest for redemption. A literary and spiritual achievement on a level with Cormac McCarthy. Destined to be the classic of the Afghan war. Bravo!"—Bing West, author of The Village and One Million Steps: A Marine Platoon at War

"And the Whole Mountain Burned is shocking in its frankness, powerful in its unceremonious honesty. The most important novel you'll read this year."—J.D. Barker, international bestselling author of The Fourth Monkey and Forsaken