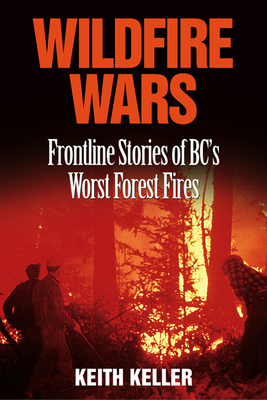 
This title is likely unavailable. Email or call for price and availability.
These spine-tingling accounts of nature's awesome destructive powers take readers behind the fire lines of BC's most fabled blazes. Keith Keller vividly chronicles the advent of firefighting innovations from bulldozers to airborne Rapattack crews - and nature's persistent indifference to that arsenal.

Wildfire Wars also reveals how firefighting brings out the best and worst in the rough-and-ready lot who tackle this job. Keller tells of political infighting and clashing egos among Forest Ministry brass, and of booze, drugs and arson on the fireline. But he also finds heroes at every link in the chain of command, from fire bosses who must make quick life-and-death decisions on little more than instinct to ordinary firefighters who risk their lives to save lumber, livestock and each other. Some are larger-than-life characters, such as Percy Minnabarriett, a Native crew foreman and rodeo rider in the Ashcroft fire district whose leg was crushed by a bulldozer.

"They'd managed to keep him in hospital at Kamloops for a year or so, but after he got out he repeatedly frustrated his doctor by cutting his hip-length cast to below the knee so he could get back to riding horses. Finally the doctor sealed him in steel rods, but they only lasted until Minnabarriet had [his wife] Marie pick him up a new blade for his hacksaw."
Keith Keller was born in Vancouver and grew up in the Fraser Valley. He has been a reporter and a teacher, and spent four summer commercial cod fishing from a one-family island off the Labrador coast. He is the author of the BC bestseller Dangerous Waters: Wrecks and Rescues Off the BC Coast, which was shortlisted for the Bill Duthie Booksellers Choice Award for best BC book of the year. He lives on Denman Island with his wife and two daughters.