What the Thunder Said: Reflections of a Canadian Officer in Kandahar (Paperback) 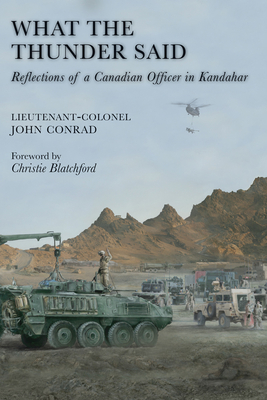 What the Thunder Said: Reflections of a Canadian Officer in Kandahar (Paperback)

By every principle of war, every shred of military logic, logistics support to Canada's Task Force Orion in Afghanistan should have collapsed in July 2006. There are few countries that offer a greater challenge to logistics than Afghanistan, and yet Canadian soldiers lived through an enormous test on this deadly international stage - a monumental accomplishment. Canadian combat operations were widespread across southern Afghanistan in 2006, and logistics soldiers worked in quiet desperation to keep the battle group moving. Only now is it appreciated how precarious the logistics operations of Task Force Orion in Kandahar really were.

What the Thunder Said is an honest, raw recollection of incidents and impressions of Canadian warfighting from a logistics perspective. It offers solid insight into the history of military logistics in Canada and explores in some detail the dramatic erosion of a once-proud corner of the army from the perspective of a battalion commander.

Lieutenant-Colonel John Conrad is a combat logistics officer with 25 years of experience. He has commanded Canada's logistics battalion in Cambodia, Bosnia, and Kandahar, where in 2006 he was decorated with the Meritorious Service Medal for his leadership. He lives in Orono, Ontario.

"A fine narrative look at the war in Afghanistan."