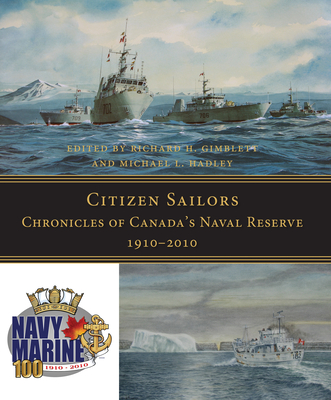 This commemorative volume produced on the occasion of the centennial of the Canadian Navy, 1910-2010, records a special kind of dual citizenship: Canadians exercising the profession of the sea in their nation's service, while also living out the demands of their civilian occupations in their home communities. The perspectives of the part-time citizen-sailors who have made up Canada's Naval Reserve over the past century provide an interesting, valuable, and timely alternative history of the Canadian Navy.

Most of the contributors to this volume have served in Canada's Naval Reserve, and all are respected authorities in their fields. Whether read on its own, or as the intended companion to The Naval Service of Canada, 1910-2010: The Centennial Story, readers will find much to delight and inform in this lavish combination of text, photos, and illustrations of the people, ships, and aircraft that have formed a proud national institution.

Richard Gimblett is command historian of the Canadian Navy and past president of the Canadian Nautical Research Society. A former serving officer, he is a contributor to volume 1 of the official history of the Royal Canadian Navy (1867-1939), and edited and contributed to The Naval Service of Canada, 1910-2010: The Centennial Story. He lives in Ottawa. Michael Hadley is professor emeritus of German, a member of the editorial board of the Canadian Nautical Research Society, and a former long-serving officer in the Naval Reserve. His works include U-Boats Against Canada, Tin-Pots and Pirate Ships (with Roger Sarty), and Count Not the Dead: The Popular Image of the German Submarine. He edited and contributed to A Nation's Navy: In Quest of Canadian Naval Identity. He lives in Victoria, British Columbia.

"Doctors Gimblett and Hadley have done an admirable job in putting together this book, a worthy companion to the Centennial Story, and a book that should be on everyone's list that has an interest Canada's history and her navy."